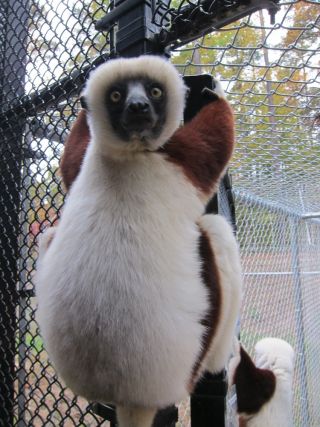 Sifaka lemurs are expert climbers, as this resident of the Duke Lemur Center demonstrates.
(Image: © Stephanie Pappas for LiveScience)

If you want to see lemurs, there are two places in the world you may want to visit. The first is Madagascar, the island nation where these unique primates evolved and the only place on Earth they're found living native.

That's fortunate for me, because while Madagascar is a bit outside my travel budget, North Carolina is but a domestic flight away. In fact, I grew up only a half-day's drive from Durham, N.C., home to the Duke University Lemur Center, a primate research mecca where lemurs roam free on acres of fenced-in woods. The Lemur Center is dedicated to conservation (lemurs are the most endangered mammals on the planet, with 91 percent of species threatened with extinction) and behavioral research (the adorable little primates are humans' very distant relatives, and their brains take us deep into our own evolutionary history).

The Duke Lemur Center sits at the end of a winding, forested road. It's surrounded by the kind of southern deciduous forests I used to play in as a kid — which made it all the weirder to stand in one and watch a herd of wide-eyed ring-tail lemurs materialize from the underbrush.

The Lemur Center is open for tours (see their website lemur.duke.edu for details), and I was there with a group of science writers, all equally excited about seeing lemurs up close. [See photos from the Duke Lemur Center]

Many of the Center's more than 200 lemurs roam outside as long as the temperature doesn't dip below 45 degrees Fahrenheit (7.2 degrees Celsius). To achieve this privilege, the lemurs must learn to come when they're called — keepers bring them in with the sound of a shaking tambourine or container of food. This ensures all the lemurs will be safe in case of a weather emergency, and the staff can always find them for medical checkups. New mama lemurs are even trained to hand their babies over to staff for weigh-ins.

High fences surround the outdoor enclosures, and the trees are cut back far enough to prevent any lemur leaps. In the Center's history, just a handful of lemurs have escaped; the last occurred in 2010, when two 6-year-old ring-tailed lemurs followed their evolutionary urge to strike out for new territory. Both were safely apprehended 36 hours later in a school library.

I'd hoped to walk out in the free-range lemur enclosures, but I hadn't realized how fearless the lemurs would be. They trotted up to our group like cats at the sound of a can opener when our guide shook a box of lemur chow, and happily scrounged for food right at our feet. Human tourists aren't allowed to touch the lemurs — they will bite in self-defense — but the lemurs know no such boundaries. As I squatted on the ground to snap a picture, one leapt by my ear like a spring-loaded Tigger. Another nuzzled up to our tour guide's ankles so freely that she nearly stumbled over him.

Perhaps the most amusing lemurs to watch were the sifakas. These brown-and-white lemurs are most comfortable in the trees. On the ground, the expert climbers move awkwardly. In fact, they get around by standing up on their back legs and galloping sideways. [Gallery: Amazing Lemur Species]

But back inside the Lemur Center is where the real action happens. In a series of low-slung buildings lined with enclosures, researchers plumb the cognitive depths of the lemur brain to uncover their sensory abilities.

Lemurs are big on smells (they themselves smell rather sharp and unpleasant), and Duke scientists are learning how they use scent to mark territory, attract mates and identify one another. Each lemur has its own unique perfume, like a fingerprint. This scent carries a dizzying array of information, researchers have found, from sex and fertility to species and age. Male lemurs have a cartilage spur on their wrists they use to dig grooves into trees, depositing their scent in a motion that looks like someone twisting a pepper grinder.

Not to anthropomorphize too much, but lemurs seem to love scent experiments. When Duke University anthropology doctoral student Katie Grogan demonstrated one experiment by spreading scent on wooden dowels, the ring-tailed lemur in the cage next to her reached his hands through the bars greedily, grasping for the dowel before it was even ready.

Elsewhere in the Center, researchers try to find out how well lemurs understand the world. For example, are they capable of understanding what other individuals can and can't see? As it turns out, when given a choice between snatching food from a person who is looking at them or from someone whose back is turned, ring-tailed lemurs will go for the person with the turned back 90 percent of the time.

Unfortunately, the ring-tailed lemur recruited to demonstrate this experiment to us was more interested in a favorite lemur pastime than in science: stink fighting. Lemurs stink fight by spreading their scent from their glands on their tails and then waving their tails at their opponents — in this case, the human experimenters, who seemed less than intimidated.

As our group headed back to our bus to bid the Lemur Center goodbye, however, the primates had one more treat for us. A chorus of alarm calls rose up, including an otherworldly bark from the black-and-white ruffed lemur, whose cries carry half a mile (0.8 kilometers). It sounded like something out of "Jurassic Park" and seemed a fitting end to a trip into the world of these transplanted primates.