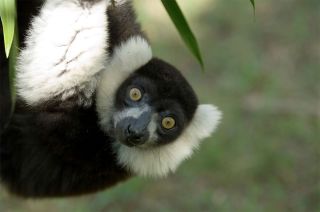 A black-and-white ruffed lemur ( Varecia variegata). In general, ruffed lemurs are found in the eastern rain forests of Madagascar, with this one having a wider range than the other ruffed-lemur species, V. rubra, according to the University of Wisconson-Madison's National Primate Research Center.
(Image: © © Conservation International/photo by Sterling Zumbrunn)

Of all the world's animals living on the verge of extinction, Madagascar's lemurs are teetering closest to the brink. A new assessment of these primates reveals they are probably the most endangered group of vertebrates on Earth, beating out all other mammals, reptiles, amphibians, birds and bony fish for the dismal distinction.

Ninety-one percent of the 103 known lemur species are threatened, conservationists concluded this week at a workshop of the International Union for Conservation of Nature (IUCN) Species Survival Commission in Antanarivo, Madagascar's capital. Twenty-three of the species are now considered "critically endangered," 52 are "endangered," and 19 are "vulnerable" on the IUCN's Red List of Threatened Species, compared to 10 percent, 21 percent and 17 percent, respectively, at the time of the previous assessment carried out in 2005.

"The results of our review workshop this week have been quite a shock as they show that Madagascar has, by far, the highest proportion of threatened species of any primate habitat region or any one country in the world. As a result, we now believe that lemurs are probably the most endangered of any group of vertebrates," said the primatologist Christoph Schwitzer, head of research at Bristol Zoo Gardens in the United Kingdom and the IUCN advisor on Madagascar's primates, in a statement.

Along with lorises and bushbabies, lemurs belong to a group called prosimian primates, defined as all primates that are neither monkeys nor apes. Lemurs live in the wild only on Madagascar; their ancestors likely rafted to the island on clumps of vegetation and trees more than 60 million years ago.

Now, scientists attribute the rapid worsening of lemurs' status to destruction of their tropical forest habitat on Madagascar, where political turmoil has increased poverty and accelerated illegal logging. Hunting has also emerged as a more serious threat to the animals than in the past. As Madagascar's biodiversity is its main tourist attraction, the scientists noted that the loss of lemurs would only exacerbate the economic problems that are causing their demise. [See Photos of Madagascar's Quirky Lemurs]

A few of the most spectacular species labeled "critically endangered" this week are the indri, the largest of the lemurs, a practitioner of life-long monogamy and a sacred species in Madagascar considered to be the ancient "brother" of humans; Madame Berthe's mouse lemur, the world's smallest primate weighing in at just 30 grams; and the blue-eyed black lemur, the only primate species other than humans to have blue eyes. The northern sportive lemur may be rarest of all, with just 18 known individuals left.

One small piece of good news emerged during the otherwise grim workshop: A previously unknown species of mouse lemur has been discovered in the Marolambo area of eastern Madagascar. Its discoverers, Peter Kappeler and his team at the German Primate Center, have yet to formally describe or name it.