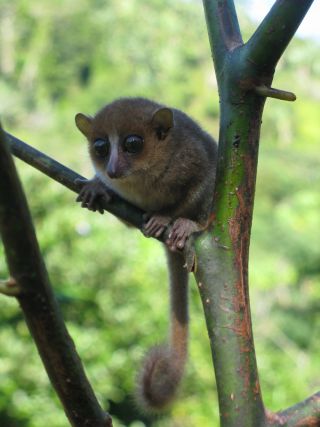 The new primate, M. gerpi is a mouse lemur that lives in the Sahafina forest in eastern Madagascar.
(Image: © Blanchard Randrianambinina)

Living in the rain forests of Madagascar is a newly discovered wonder of ecological diversity: A lemur that has been hiding out in the middle of about a dozen other lemur species.

The new lemur is about the size of a hamster, which makes it slightly larger than the others in the area, and it likely lives off an omnivorous diet in the trees, scientists report. It has relatively small ears and a longish tail. The little primate, which weighs in at 2 to 2.5 ounces (about 60 or 70 grams), is nocturnal and sticks to the lowland areas of the rain forest.

"We haven't been able to collect any other data on it," study researcher Ute Radespiel of the University of Veterinary Medicine Hannover, in Germany, told LiveScience. "We know what it looks like, but we can't tell you much about its behaviors."

The research group set out to catalog the lemur species in the Sahafina forest in eastern Madagascar during two trips in 2008 and 2009. The researchers weighed and measured the lemurs they found, and took tiny skin samples for genetic analysis in the lab. When the results came back they found a surprise: Some didn't match any known lemur species.

The new species' closest genetic relative, the Jolly's mouse lemur, lives about 150 miles (250 km) to the south, in another lowland rain forest area. The two groups are separated by rivers, which stop them from interbreeding. It's possible that an ancient relative of this mouse lemur family spread out through the lowland areas, eventually diverging into multiple species, including Gerp's and Jolly's, the researchers say.

Some factor, probably the ability to survive various altitudes, stops these two species from sharing a habitat. "There's an altitudinal-range variation," Radespiel said. "Animals can't go up or down so easily; they seem to be restricted in their preferences when it comes to habitats."

But the lowland rain forests encompassing this new lemur's small range aren't protected areas of Madagascar. As local villagers freely enter the forests to hunt wildlife, harvest wood, and create other disturbances, the habitat is getting increasingly fragmented.

"There is no continuous forest anymore in these lowland areas, only patches," Radespiel said. "The situation for these species is getting more and more precarious."

She said efforts to conserve the areas are the only way to save these species of lemur.

The study was published Jan. 9 in the journal Primates.