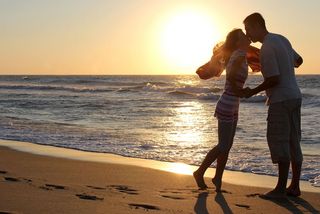 The warm weather and escapism mentality may make it more likely you'll have a fling during the summer.
(Image: © KonstantinChristian | Shutterstock)

As a season, summer has a lot going for it when it comes to fun: vacations, barbeques, hanging around the pool and at the beach, eating ice cream. Something else fun the hot season might well have going for it: "summer love," and perhaps of the carefree, temporary variety — the proverbial summer fling.

From a biological and a social science perspective, is there something special about the summer season that sets our hearts or at least our, er, loins aflutter?

A number of factors, it would seem, could promote romantic encounters in the summertime, not least of which is the heightened sociability the nice weather brings in comparison to cold winter's stay-at-home funk. [What Is Love? 8 Experts Answer]

Other circumstances in play could include the more revealing clothing of the season, triggering sexual arousal, as well as summer psychologically being a temporary escape from routines for some, especially young students, which can lead to novel situations and the time to pursue love interests.

"Time spent with someone increases attraction in general — in a classroom, at the workplace, et cetera," said Catherine Sanderson, a psychology professor at Amherst College in Massachusetts. "But it also means that people may feel more free to engage in romantic and sexual experiences if "on break" from their real life. You can see this anecdotally with spring break and summer romances."

Summer love, on the jukebox or at the drive-in

To put one's finger on the cultural pulse at least as set by the music and movie industry, the phenomenon of summer love certainly seems well evidenced.

According to Wikipedia, there are at least seven songs with the title "Summer Love" going back to 1957, with Justin Timberlake and new boy band One Direction most recently adding to the list in 2007 and 2012, respectively. Three films from 1958, 2001 and 2006 also share the title.

That accounting, of course, does not even come close to touching on the countless examples of pop culture that highlight summertime enchantment. To take just a couple: the 1971 musical and 1978 movie "Grease" with the song lyrics for its "Summer Nights" including "summer fling, don't mean a thing . . . summer heat, boy and girl meet . . . it turned colder, that's where it ends;" and Andre 3000 of Outkast rhyming in 1998, "I remember her number like the summer."

Other "data," as such, suggest that summer love might not be as prevalent as pop culture might have it. But that depends on how one interprets the information.

Last year, for example, Facebook released statistics for 2010 and 2011 about the time of year when members of the social network changed their relationship status. For all three age groups assessed — under 25, 25 to 44, and 45 and over — the months May through August showed a big net increase in breakups, compared with net gains throughout much of the rest of the year.

A chunk of those  relationships ending in the summertime, however, could be chalked up to one or both partners being tempted by the fruits of another, ripened, as it were — and to extend the metaphor — by summer's heat.

Another angle: When using childbirths as a proxy of love — or, more accurately, sex — summer stacks up as a slightly less amorous time of year than others.

According to records compiled by the Centers for Disease Control and Prevention, summer months have historically led in birth numbers, which when counting back nine months places those more-copious conceptions into the autumn and winter.

In 2011 and 2012, August led the year as it often does with around 360,000 births, and several tens of thousands more than February, the (shortest) month that tends to have the fewest births. [In Which Month Are the Most Babies Born?]

Getting out and about

Regardless of whether "summer love" can be sussed out from anecdotal, cultural or more stringent data collection, some particulars of the season certainly set the stage for hookups.

Social activity is a major consideration, with people spending more time outside of the home and fraternizing at events. "People may well find that they are more socially active in the summer," said Sanderson.

The type of activity could matter as well. "People may exercise more in the summer due to warmer weather and that can increase feelings of arousal, simply by the act of doing arousing activities," Sanderson told LiveScience.

As noted prior, the sea of flesh that summertime temperatures exposes might widen some eyes and lead to overtures. "Warm weather — fewer clothes — could increase arousal," said Sanderson.