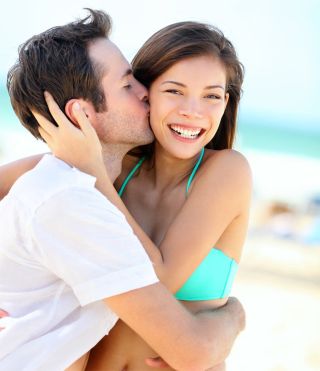 'Tis the season for a little love ... and nooky.
(Image: © Maridav, Shutterstock)

Real-time tracking by researchers has identified a risqué trend in winter and early summer — people on the Internet looking for love — or at least sex.

In a new study published this month in the journal Archives of Sexual Behavior researchers tracked Google keyword searches in the United States for pornography, prostitution and dating sites between January 2006 and March 2011. Researchers wanted to gauge the real-time mood of the nation and found that online interest in the mating game peaked around Christmas and early summer.

This bi-annual cycle isn't unheard of. A 2007 review of research on sexual activity in young people published in the journal Health Education found a six-month cycle for human sexual activity in the United States. Research on the so-called "holiday season effect" and the "summer vacation effect" has involved studying the outcomes of sex, such as births and sexually transmitted infections (STI) — events that occur weeks to months after doing the deed.

Scientists have also documented increases in condom sales around Christmas week and during the summer months. [The Sex Quiz: Myths, Taboos and Bizarre Facts]

But psychologists Patrick and Charlotte Markey at Villanova University in Pennsylvania and Rutgers University in New Jersey, respectively, wanted to see if they could detect patterns and changes in sexual activity more quickly, especially given health concerns such as STIs.

Data on how frisky people feel at specific points in time are hard to come by. The difficulty of obtaining accurate self-reports, and the sheer amount of information needed to detect trends has hampered researchers' abilities. So the psychologists turned to the Web.

Patrick Markey was surprised to find the bi-annual trend in pornography searches. Porn-related keyword searches peaked during winter and early summer, a trend not seen with neutral search terms.

"I was amazed that an almost identical trend existed for dating and prostitution searches," Markey wrote in an email to LiveScience.

He hopes his study will be of broader use. "It would be great if these findings could be used to target the timing of safe sex campaigns," he wrote.

The reason for the 6-month sexual seasonality is not yet clear. The findings could represent a "primitive biological cycle," U.K.-based neuroscientist and blogger NeuroSkeptic, who was not involved in the study, wrote on his blog in response to the paper. Or the findings could have to do with free time.

"One possibility is that it's purely a social construction driven by the fact that in Western cultures, Christmas and summer are the main holiday seasons," NeuroSkeptic wrote.