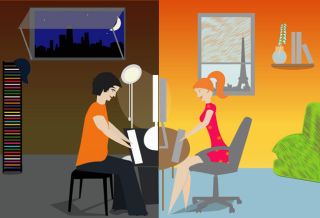 Lovers still see a face-to-face encounter as the ideal way to break up their relationship in the complicated age of Facebook and cell phones, according to a researcher's interviews with college students and middle-age adults.

Such widespread agreement on breakup etiquette stood out in the midst of social complications and confusion described in a new book, "The Breakup 2.0: Disconnecting over New Media" (Cornell University Press, July 2010). But far fewer people seem to practice what they ask for – just one complication among many in today's relationships.

"I got really interested in the fact that all this technology is designed to connect with people, yet people [are] constantly dealing with the problem of how to disconnect," said Ilana Gershon, an assistant professor of communication and culture at Indiana University in Bloomington.

Social networking and mobile technologies have leapt far beyond the early Internet days of "You've got mail!" Gershon found digital breakups also have evolved over time. For instance, the group of 67 undergraduate students interviewed by Gershon produced very few stories of breakups done by e-mail, and most such breakups were linked to the very small handful of adult interviewees between the ages of 30 and 50.

"For the most part, college students are texting, calling, or using IM to talk with friends," Gershon told LiveScience. "So that's how they were breaking up."

Love in the age of texting

Different technologies seemed popular at different relationship stages. Many people reported using Facebook or texting to kick off conversations with love interests, then moving on to phone calls and seeing one another in person.

But the hodgepodge of communication technologies also raised the possibility for "lost in translation" consequences.

Gershon recalled how some people described texting with cell phones as a more intimate stage than talking over the phone. One girl, for example, said she got excited over each text message she received from a guy she was dating. But then she reminded herself that the guy was relying upon texting because he was not on Facebook.

Instant messaging also presented a mixed bag of perceptions. Some study participants thought IMs gave them a lot of information about how their significant other communicated.

But one woman noted that after all the time she and her longtime boyfriend spent interacting online, they encountered communication issues face-to-face, because they had failed to become sensitive to one another's voice and body language.

Every move you make

Many college students told Gershon that after breaking up they engaged in "Facebook stalking" of their exes for long periods of time. Essentially the person would read every message and new friend on the Facebook page of the ex. They did it regardless of which one of them had initiated the breakup, and they described it as compulsive but rarely satisfying behavior.

Gershon suggested that practice is like indulging in addictive snacks.

"It's giving them 'hot Cheetos' of information, so they get a taste of something – it tantalizes but doesn't satisfy," Gershon explained. "They wanted closure or wanted to know who their ex-lover was now with, and they never really felt like they got the answers they wanted."

Still, the most unusual form of stalking came from a member of the older generation. A woman in the midst of divorce figured out her partner's new lover by matching films in their Netflix queue against favorite movies listed on the suspected new lover's Facebook page.

Gershon found particular fascination with the choice of ringtone that people assigned to their exes.

Some people chose melodramatic breakup songs for the ringtones for exes, as a warning about incoming calls. Others simply deleted the phone numbers or changed the name without looking at the number, as a way of warding off temptation to get back in touch.

One guy said he preemptively assigned any current love interest a lukewarm song "in case it didn't work out," Gershon said.

Most people say etiquette exists for the swarm of new communication tools. The problem, Gershon said, comes from everyone having a different idea of that etiquette.

For instance, Gershon asked interviewees about the proper etiquette for changing a Facebook relationship status – say, from "in a relationship" to "single." One woman responded it's the person being dumped who changes the status: "Everyone in my sorority knows that."

However, Gershon said that practice is not widely accepted, and she can only imagine all those sorority girls getting their hearts broken a second time after being dumped.

She does not foresee the emergence of any standard breakup etiquette anytime soon, she said, because no one enforces any standard rules for new social media.

By contrast, etiquette for business e-mails and other communication has already been enforced by corporations worried about issues such as privacy and confidentiality. Gershon said she wants to investigate next how employers and employees interact online or via mobile technology.

Even if no clear etiquette rules exist, Gershon has one piece of advice for everyone: Change any shared passwords after a breakup.

"Even people … who really respected privacy would come in to talk about this and feel terribly guilty and confess that they had done this," Gershon said. "If that kind of person will break into e-mail and Facebook accounts, I think that's too much temptation."