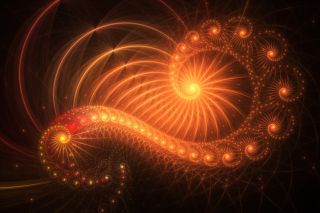 The golden ratio is one of the most famous irrational numbers; it goes on forever and can’t be expressed accurately without infinite space.
(Image: © Shutterstock)

The number phi, often known as the golden ratio, is a mathematical concept that people have known about since the time of the ancient Greeks. It is an irrational number like pi and e, meaning that its terms go on forever after the decimal point without repeating.

Over the centuries, a great deal of lore has built up around phi, such as the idea that it represents perfect beauty or is uniquely found throughout nature. But much of that has no basis in reality.

Phi can be defined by taking a stick and breaking it into two portions. If the ratio between these two portions is the same as the ratio between the overall stick and the larger segment, the portions are said to be in the golden ratio. This was first described by the Greek mathematician Euclid, though he called it "the division in extreme and mean ratio," according to mathematician George Markowsky of the University of Maine.

You can also think of phi as a number that can be squared by adding one to that number itself, according to an explainer from mathematician Ron Knott at the University of Surrey in the U.K. So, phi can be expressed this way:

This representation can be rearranged into a quadratic equation with two solutions, (1 + √5)/2 and (1 - √5)/2. The first solution yields the positive irrational number 1.6180339887… (the dots mean the numbers continue forever) and this is generally what's known as phi. The negative solution is -0.6180339887... (notice how the numbers after the decimal point are the same) and is sometimes known as little phi.

One final and rather elegant way to represent phi is as follows:

This is five raised to the one-half power, times one-half, plus one-half.

Related: The 11 Most Beautiful Mathematical Equations

Phi is closely associated with the Fibonacci sequence, in which every subsequent number in the sequence is found by adding together the two preceding numbers. This sequence goes 0, 1, 1, 2, 3, 5, 8, 13, 21, 34 and so on. It is also associated with many misconceptions.

Does the golden ratio exist in nature?

Though people have known about phi for a long time, it gained much of its notoriety only in recent centuries. Italian Renaissance mathematician Luca Pacioli wrote a book called "De Divina Proportione" ("The Divine Proportion") in 1509 that discussed and popularized phi, according to Knott.

Pacioli used drawings made by Leonardo da Vinci that incorporated phi, and it is possible that da Vinci was the first to call it the "sectio aurea" (Latin for the "golden section"). It wasn't until the 1800s that American mathematician Mark Barr used the Greek letter Φ (phi) to represent this number.

As evidenced by the other names for the number, such as the divine proportion and golden section, many wondrous properties have been attributed to phi. Novelist Dan Brown included a long passage in his bestselling book "The Da Vinci Code" (Doubleday, 2000), in which the main character discusses how phi represents the ideal of beauty and can be found throughout history. More sober scholars routinely debunk such assertions.

For instance, phi enthusiasts often mention that certain measurements of the Great Pyramid of Giza, such as the length of its base and/or its height, are in the golden ratio. Others claim that the Greeks used phi in designing the Parthenon or in their beautiful statuary.

But as Markowsky pointed out in his 1992 paper in the College Mathematics Journal, titled "Misconceptions About the Golden Ratio": "measurements of real objects can only be approximations. Surfaces of real objects are never perfectly flat." He went on to write that inaccuracies in the precision of measurements lead to greater inaccuracies when those measurements are put into ratios, so claims about ancient buildings or art conforming to phi should be taken with a heavy grain of salt.

The dimensions of architectural masterpieces are often said to be close to phi, but as Markowsky discussed, sometimes this means that people simply look for a ratio that yields 1.6 and call that phi. Finding two segments whose ratio is 1.6 is not particularly difficult. Where one chooses to measure from can be arbitrary and adjusted if necessary to get the values closer to phi.

Attempts to find phi in the human body also succumb to similar fallacies. A recent study claimed to find the golden ratio in different proportions of the human skull. But as Dale Ritter, the lead human anatomy instructor for Alpert Medical School (AMS) at Brown University in Rhode Island, told Live Science:

"I believe the overarching problem with this paper is that there is very little (perhaps no) science in it … with so many bones and so many points of interest on those bones, I'd imagine there would be at least a few" golden ratios elsewhere in the human skeletal system.

And while phi is said to be common in nature, its significance is overblown. Flower petals often come in Fibonacci numbers, such as five or eight, and pine cones grow their seeds outward in spirals of Fibonacci numbers. But there are just as many plants that don't follow this rule as those that do, Keith Devlin, a mathematician at Stanford University, told Live Science.

People have claimed that seashells, such as those of the nautilus, exhibit properties in which phi lurks. But as Devlin points out on his website, "the nautilus does grow its shell in a fashion that follows a logarithmic spiral, i.e., spiral that turns by a constant angle along its entire length, making it everywhere self-similar. But that constant angle is not the golden ratio. Pity, I know, but there it is."

While phi is certainly an interesting mathematical idea, it is we humans who assign importance to things we find in the universe. An advocate looking through phi-colored glasses might see the golden ratio everywhere. But it's always useful to step outside a particular perspective and ask whether the world truly conforms to our limited understanding of it.