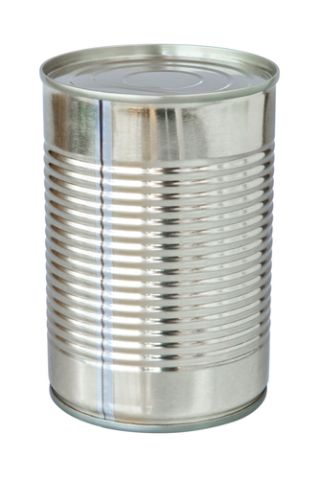 A "tin can" used to store food. Most cans used for this purpose are now tin-plated steel.
(Image: © Sergio Stakhnyk | Shutterstock)

Tin is an element perhaps best known for its use in tin cans — which, these days, are almost always actually aluminum. Even the original tin cans, first introduced in the 1800s, were mostly steel, plated with tin.

So tin may be unassuming, but it's not unimportant. This metal is used to prevent corrosion and to produce glass. It's most often found mixed, or alloyed, with other metals. Pewter, for example, is mostly tin.

Tin is relatively rare, making up only about 2 parts per million of the Earth's crust, according to the U.S. Geologic Survey. Tin is extracted from various ores, chiefly from Cassiterite (SnO2). The metal is produced from reducing the oxide ore with coal in a furnace.

Very little tin has been found in the United States, much of it in Alaska and California. According to Los Alamos National Laboratory, the metal is mainly produced in Malaya, Bolivia, Indonesia, Zaire, Thailand and Nigeria.

Perhaps the most important use of tin, historically, has been to make bronze — an alloy of copper and tin or other metals — that changed civilization by ushering in the Bronze Age. People began making or trading for bronze tools and weapons at different times, depending on geography, but the Bronze Age is commonly accepted to have started around 3300 B.C. in the Near East.

According to the Jefferson National Linear Accelerator Laboratory, the properties of tin are:

Tin's use in bronze stretches back some 5,000 years. It has also appeared occasionally in the archaeological record on its own. For example, researchers excavating at the Jewish Temple in Jerusalem in 2011 discovered a button-sized piece of tin stamped with the Aramaic words for "pure for God." This seal may have been used to mark ceremonially pure objects for rituals, according to a report in the Haaretz Newspaper.

Beyond bronze, tin's greatest contribution to humankind was probably the humble tin can. The can had its origins in the perennial problem of how to feed an on-the-move army. According to the Can Manufacturers Institute (yes, even cans have a trade organization), Napoleon Bonaparte offered a reward in 1795 to anyone who could come up with a way to preserve food for military use. In 1810, French chef Nicolas Appert won the 12,000-franc prize by inventing canning — the process of sealing food or drink in a jar or bottle with the use of boiling water.

This discovery cleared the way for the invention of the tin can only a year later. In 1810, British merchant Peter Durand got a patent for using tinplated steel to can food. Tin resists corrosion, making it an ideal covering for relatively cheap steel.

The tin can arrived on American shores in 1818, and Thomas Kensett & Co, a manufacturing company, patented the tin can in America in 1825. The Civil War prompted the increased popularity of the tin can, as generals once again searched for a way to feed their soldiers.

Tin's heyday ended in the mid-20th century, however, when Coors Brewery introduced the first aluminum can. Cheaper, lighter and recyclable, aluminum rapidly overtook tin and steel.

But tin still has its uses. Tin plus the element niobium makes a superconductive metal used for wire. A tin/lead alloy is used to make solder. Copper and other metals are mixed with tin to make pewter, which was once a common metal for tableware. And window glass gets its silky smooth surface from a mold of molten tin, a method called the Pilkington process.

Recently, tech researchers have gotten excited about graphene, a single-atom layer of carbon that is both harder than diamonds and stretchable like rubber. It's entirely possible that the next high-tech advance like graphene will come from humble tin.

Researchers are Stanford University and the Department of Energy's SLAC National Accelerator Laboratory have invented a one-atom-thick layer of tin they're calling stanene.

Stanene is special because it is the first material able to conduct electricity with 100 percent efficiency at room temperature. The addition of a few fluorine atoms maintains this efficiency up to and beyond the temperatures at which computer chips operate — up to about 212 F (100 C).

"According to Moore's law, the number of transistors in a dense integrated circuit has doubled approximately every two years," study researcher Yong Xu, now a physicist at Tsinghua University in Beijing, told Live Science. "As a consequence, the power density of integrated circuits increases exponentially, leading to serious problems of power consumption and heat dissipation."

"Many topological insulators have been fabricated by heavy elements including mercury, bismuth, antimony, tellurium and selenium," Xu said. "None of them were perfect conductors of electricity at room temperature."

Tin hadn't been studied for this purpose before. But Xu and his colleagues found that when tin atoms are arranged in a single, honeycomb layer, the elements' properties change. It becomes a perfect conductor of electricity at room temperature, with not a single stray electron lost, the researchers reported in November 2014.

Electronics made with stanene should thus produce less heat and draw less power than their silicon counterparts.

Xu and his collaborators made the single-layer tin with a process called molecular beam epitaxy, which condenses gaseous versions of the element in a thin layer inside a vacuum. It's a challenging process, Xu said, requiring exact temperatures and growth speed of the layer to ensure the atomic structure is just right. The team hopes to develop cheaper and easier ways to make stanene in the future.

"The next step is to grow high-quality stanene samples on the large scale and then use the material for fundamental research and practical applications," Xu said.