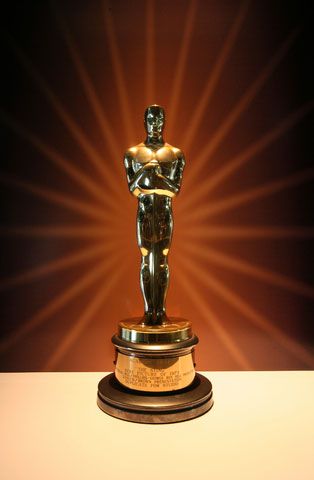 Weighing in at 8.5 pounds, an Oscar, officially known as the Academy Award of Merit, are gold-plated with a core of Britannium.
(Image: © dreamstime)

On Sunday, nominated movie stars will show up at Hollywood’s Kodak Theatre hoping to walk away clutching one of those glowing statuettes. But there's more to that golden guy than meets the eye.

When they pick up their trophies, the winning celebs are toting around 8.5 pounds of metal. Oscar is 13.5 inches (34 centimeters) tall.

The Oscar statuettes, officially dubbed the Academy Award of Merit, have a 24-karat gold plating on their surface.

Beneath the gold, the statuette's interior is a metal mixture called Britannium, also called Britannia metal. It is an alloy of tin (93 percent), antimony (5 percent), and copper (2 percent). It's known for its smooth texture and silvery appearance.

Though this mixture of metals has been the standard for the shiny trophies for several decades, it hasn't always been the composition of choice. The statuettes presented at the first Academy awards ceremonies, a private dinner on May 16, 1929, at the Hollywood Roosevelt Hotel, were gold-plated solid bronze.

During World War II, when metals and other materials were scarce, the Oscars were made of plaster. After the war, the plaster statues were then turned in for the normal gold-plated versions, according to the U. S. Geological Survey.

Since the first Academy awards banquet, 2,701 statuettes have been presented.

New statuettes are cast each January, then molded, polished and buffed by workers at R.S. Owens & Company, which has made the awards since 1982.