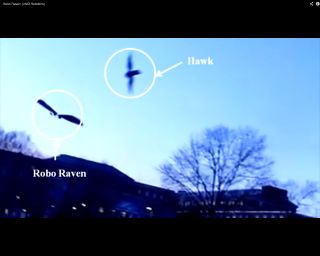 Hawks and other birds of prey are famous for their keen eyesight.

But researchers have created a robotic bird so lifelike that it's even fooled hawks, which swoop down and attack it the way they would any other pigeonlike bird.

Robo Raven is almost 2 feet long (60 cm) and weighs less than a can of soda. Its original design was developed in 2007 by University of Maryland professors S. K. Gupta and Hugh Bruck, who carried the battery-powered bird through several evolutions before arriving at the current model.

The long lead time was necessary because, during the trial-and-error process needed to improve the robotic bird, any error would lead to a crash. This would sometimes destroy the robot, so each step in the design process was painstakingly slow.

What makes the current model so realistic is its ability to move each wing independently of the other, just as real birds do. This enables the Robo Raven to swoop, soar, dive and flap its wings in a much more aerobatic way than older models, whose wings could only move simultaneously.

"Our new robot, Robo Raven, is based on a fundamentally new design concept," Gupta said in a news release. "It uses two programmable motors that can be synchronized electronically to coordinate motion between the wings."

Some of the design improvements to the Robo Raven were inspired by designs found in nature. For example, the robot uses a hollow framework to provide a stiff, lightweight structure; real birds use a hollow skeletal system for the same task.

The robot is guided by a handheld radio that controls its flight. Some of the funding for the Robo Raven was provided by the U.S. Army Research Laboratory, which is investigating the Robo Raven’s possible uses for surveillance and other missions.

The Robo Raven "attracts attention from birds in the area," John Gerdes, an engineer at the Army’s Aberdeen Proving Ground in Maryland, told Military.com.

Whereas seagulls and other birds try to fly in formation with the Robo Raven, raptors like hawks have tried to attack the bird as quarry.

"Generally, we don't see them coming," Gerdes said. "They will dive and attack by hitting the bird from above with their talons; then, they typically fly away."