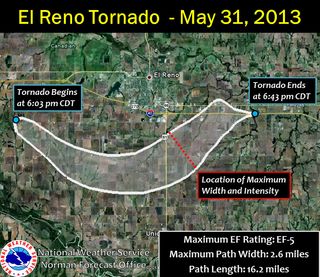 The path of the tornado that hit near El Reno, Okla., a suburb of Oklahoma City, on May 31, 2013. The tornado was judged by researchers to have been an EF5 at its peak and to have reached 2.6 miles (4 kilometers) wide at its peak (marked on the map).
(Image: © NWS/NOAA)

The tornado that struck near the Oklahoma City suburb of El Reno last Friday (May 31) has been upgraded to an EF5 strength — the strongest rating on the Enhanced Fujita scale. National Weather Service (NWS) storm surveyors also put the tornado's path at a whopping 2.6 miles (4 kilometers) across at its widest point, making it the widest tornado on record.

The tornado was part of an outbreak that hit the area around the Friday rush hour and endangered thousands of people on local highways. Three storm chasers were killed in the outbreak after a tornado picked up and destroyed their vehicle — an event that has caused some soul-searching in the chaser community.

The May 31 outbreak came a little more than a week after another EF5 tornado decimated the city of Moore, Okla., killing 24 people. Both tornado outbreaks were made possible by optimal tornado conditions, which may give rise to more twisters later this week,said Jeff Weber, a scientist with the University Corporation for Atmospheric Research in Boulder, Colo.

"To have two EF5s within less than two weeks in the same general area — that's highly unusual," Weber told LiveScience. "Off the top of my head, I haven't heard of it happening before."

The tornadoes were made possible by "perfect" tornado conditions in the area, which have been intermittent for weeks, Weber said. Specifically, the alignment of the jet stream is bringing dry, cold air down from the north and allowing it to interact with warm, moist air from off the Gulf of Mexico, which sets up a volatile situation.

Like a wedge, the cold air collides with the warm air and causes it to rise, since warm air is less dense, Weber said. This rising warm air has created thunderstorms that have, in turn, spawned tornadoes.

Stronger tornadoes tend to be wider tornadoes. When there is a lot of moisture in the atmosphere and a lot of cold upper-level air — as was the case in Oklahoma on Friday — clouds form closer to the ground. If a tornado forms, it tends to get wider and pulls in the cloud from which it forms, known as the wall cloud, Weber said. These are called wedge tornadoes, named after their wedgelike shape.

"What it's doing is bringing the higher-speed winds of the wall cloud closer down to the surface of the Earth," Weber said.

The tornado's maximum wind was clocked at 296 mph (476 km/h), close to the highest winds ever recorded on Earth, according to the Washington Post's Capital Weather Gang blog. The wind speeds, as well as the path and width of the tornado, were measured by mobile Doppler units. These radar instruments can be moved around on vehicles and narrowly focused on tornadoes and storms. Unlike stationary radars, which only scan about once every 5 minutes, the mobile radars can be targeted to a narrow area of interest and complete scans every 5 seconds, giving researchers a more detailed picture of the storm, Weber said.

More extreme weather on the way

The bad weather in Oklahoma may not end with these recent tornadoes, as more extreme weather could be on the way later this week. "We have a perfect setup for really big tornadoes over this part of the country — and it looks like we might see [a tornado outbreak] again midweek," Weber said.

The El Reno tornado was on the ground for 40 minutes, and traveled a total of 16.2 miles (26 km), the NWS reported. The twister was wider than the length of New York City's Central Park.

Previously, the record for the widest tornado was 2.5 miles (4 km), held by a twister that ripped through Nebraska on May 22, 2004.