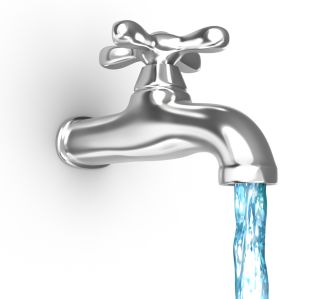 Fluoride has been added to U.S. public drinking supplies since the 1940s.
(Image: © Alex Mit | Shutterstock)

Water fluoridation is the addition of the chemical fluoride to public water supplies, for the purpose of reducing cavities.

About two-thirds of the U.S. population has fluoridated public water, according to the Centers for Disease Control and Prevention (CDC). Of those served by community water systems, the percentage climbs to 74.6 percent.

Fluoride is an ionic compound derived from fluorine, which is the single most reactive element; it is naturally found in many rocks. About 95 percent of the fluoride added to public water supplies is produced from phosphorite rock, according to the CDC.

Fluoride is added to public water supplies at an average concentration of about 1 part per million (1 ppm) or 1 milligram per liter, or slightly below. Naturally occurring fluoride concentrations in surface waters depend on location but are generally low and usually do not exceed 0.3 ppm. Groundwater can contain much higher levels, however.

The change was recommended because most people in the United States have access to more sources of fluoride than they did when the guidelines were first put in place. "The adjustment in amount is more representative of the current needs of the population. Due to the increased use and accessibility of other fluoride sources (toothpaste, mouth rinse, etc.) and other improvements in oral health care, these new recommendations have been made," said Alice Lee, a pediatric dentist at Montefiore Medical Center in the Bronx, New York.

Fluoride works by binding to tooth enamel, which is primarily made up of hydroxylapatite, a crystal composed of calcium, phosphorus, hydrogen and oxygen, according to Scientific American. By replacing the hydroxyl molecule on hydroxylapatite, fluoride makes the tooth more resistant to acid attack from bacteria. Exactly how fluoride helps protect teeth, and how much it protects them, however, isn't completely clear. Within the last 15 years, however, research has revealed that fluoride primarily works topically, such as when it applied to the teeth in fluoride-rich toothpaste.

Since its introduction beginning in the 1940s, fluoridation has been the source of considerable controversy. Pro-fluoridation supporters say that the process is "safe and effective" for reducing cavities, particularly in poor children. Water fluoridation is endorsed by the American Medical Association, the American Dental Association and the CDC, which lists it as one of the top 10 most important public health measures of the 20th century.

Those on the opposite side say that it is unethical form of mass-medication, without each individual's consent or knowledge. By putting fluoride in drinking water, the dosage cannot be controlled, since some people — like laborers and people with kidney problems — drink much more water than others. People opposed to fluoridation also argue that since fluoride-rich toothpaste is available, fluoride needn't be added to water. The first fluoridated toothpaste, Crest, was introduced in 1955.

Fluoride opponents, such as the Fluoride Action Network, cite studies showing that high levels of fluoride have been linked to a number of negative health effects like bone fractures, thyroid disorders and impaired brain development and function.

One study published in the fall of 2012 in the journal Environmental Health Perspectives found a link between high fluoride levels found naturally in drinking water in China and elsewhere in the world, and lower IQs in children. The paper looked at the results of 27 different studies, 26 of which found a link between high-fluoride drinking water and lower IQ. The average IQ difference between high and low fluoride areas was 7 points, the study found.

The most obvious health effect of excess fluoride exposure is dental fluorosis, which when mild includes white streaks, and when severe can include brown stains, pits and broken enamel. As of 2010, 41 percent of kids ages 12 to 15 had some form of dental fluorosis, according to the CDC.

"The new recommendations will maintain the caries prevention benefits of fluoride … and will simultaneously reduce the risk of dental fluorosis in younger patients," Edward H. Moody, Jr., a dentist and president of the American Academy of Pediatric Dentistry (AAPD), told Live Science.

A 2009 study that tracked fluoride exposure in more than 600 children in Iowa found no significant link between fluoride exposure and tooth decay. Another 2007 review in the British Medical Journal stated that "there have been no randomized trials of water fluoridation," which is currently standard for all drugs.

Is fluoride bad for you?

It depends who you ask; fluoride is unquestionably toxic at certain concentrations. The most comprehensive report on fluoride was published in 2006 by the National Research Council, done at the behest of the Environmental Protection Agency. That group found that the upper limit for fluoride, at 4 ppm, was too high to prevent a certain percentage of kids from developing severe dental fluorosis and recommended the EPA lower this limit.

The CDC says that the level at which it is added to the water (1 ppm) is safe and effective. Kerry Maguire, of the Forsyth Institute, an independent (not-for-profit) research institute in the United States specializing on oral health and its connection to overall wellness, agrees with the CDC.

"For the children I treat, fluoridated drinking water translates into fewer cavities requiring a trip to the dentist and more time in school," she said. "As a dentist and scientist – as well as a mother and grandmother – I welcome the CDC’s affirmation of the safety and effectiveness of community water fluoridation.”

Water is fluoridated in 29 of the 30 largest cities. The exception is Portland, Ore. For the fourth time since 1956, voters in Portland defeated a plan in 2012 to add fluoride to the public water supply. For weeks, residents had been contentiously debating fluoridation.

Correction: This article was updated on June 29, 2015, to include the correct percentage of the U.S. population that has access to fluoridated water.