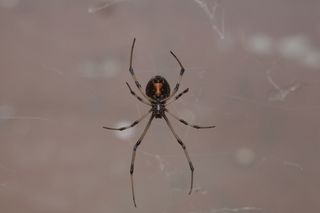 Question: I am petrified of spiders. Is my fear justified? Are they dangerous or just creepy?

Answer: Spiders are not aggressive. They bite you only in self-defense. Most bites by spiders are harmless. However, there are dangerous spiders. Spider bites are responsible for fewer than three deaths a year in the United States.

Spider bites have caused people to have limbs amputated. These victims refused to get medical remedies early and suffered from large wounds that became infected.

Spiders do not attack in packs. They don't get into bed with you and bite you in your sleep. Spiders like to be left alone in crannies where they snare insects without intrusion.

There are at least 50,000 spider species. Spiders are defined as having eight jointed legs, no wings, no antennae and only two body sections. Spiders spend their entire lives capturing and eating other insects.

All spiders deliver venom to their victims through fangs. The fangs of most spiders are either too short or too fragile to penetrate human skin.

The most dangerous spiders to humans are the black widow and brown recluse.

The black widow spider is from one-half inch to one inch long. It is shiny and deep black with an hourglass-shaped mark on its belly. The mark is red or orange.

Black widow spiders live in dark places such as closets and woodpiles. Only the female spider is dangerous to humans. These spiders are found throughout North America, but are most common in the southern and western areas of the United States.

Seniors, young children and people with high blood pressure are at highest risk of developing symptoms from a black widow spider bite, which looks like a red ring.

If muscle cramps develop, take the patient to the nearest hospital. Medications are used to treat the cramps, spasms and pain of a bite. Antivenom is given for severe poisoning.

The brown recluse spider, also known as the violin or fiddleback spider, is common in the midwestern and southern states. It is brown with a dark violin-shaped marking on its head. This spider is about a half-inch long and is light brown.

Brown recluse spiders are usually found underneath logs, rock piles and leaves. If these spiders wander indoors, they hide in dark closets, shoes, or attics.

A fluid-filled blister forms at the site of the bite and then drops off to leave an explanding ulcer. This injury requires professional medical attention. Other possible symptoms include mild fever, rash, nausea and fatigue.

There is no special treatment or medication used for a bite from a brown recluse spider. If infection develops, antibiotics are used.

There are other spiders that can produce bite wounds like the bite of the brown recluse. Some of these are the hobo spider, running spider, jumping spider, wolf spider, tarantula, sac spider and orbweaver spider.

What looks like a spider bite may have been caused by kissing bugs, fleas, bed bugs, flies, mites, wasps, ants and blister beetles. In addition, a spider bite might be caused by herpes, bedsores, diabetic ulcers, poison oak and Lyme disease.

General first-aid treatment for spider bites includes cleaning the wound, icing the bite to reduce pain, and elevating the wound site if possible.