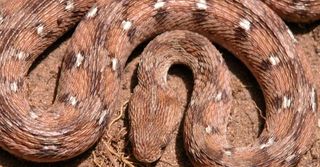 Snakebites are a significant burden in Sub-Saharan Africa. The ocellated carpet viper, shown above, is a common snake in the African savannah. A bite from this snake can cause hemorrhaging and death.
(Image: © IRD / JF Trape)

Snakebites are a significant public health problem in sub-Saharan Africa, yet the problem is neglected, researchers say. As many as 1.5 million people in that region are bitten by snakes each year, according to a new study that analyzed three decades worth of surveys and medical reports. Previous studies were based on less reliable methods and may have underestimated the problem, the researchers said. The majority of snakebites and deaths from these bites occur in rural areas, where access to health care services is limited, the researchers said. The new findings are important because, without knowing the true size of the problem, and which areas are most affected, authorities cannot properly address the issue, said study researcher Jean-Philippe Chippaux, of the Institute of Research for Development (IRD) in Paris. Currently there is only enough anti-venom (also called antivenin) available in the region to treat about 10 percent of snakebite cases. Pharmaceutical companies have been reluctant to manufacture anti-venom because they do not know how much to make or where to distribute it, Chippaux said. The new findings may signal to these companies that there is a need for more anti-venom. Doctors in the region should also be trained to treat snake bites and administer anti-venom, Chippaux said. Deadly snake bites Some people are bitten by nonvenomous snakes and others by venomous snakes that don't inject venom. All told, about half of snake bites actually result in venom being injected into the victim. However, complications from these bites can severe or fatal. For instance, the ocellated carpet viper is common in the African savannahs, and has very potent venom that can cause hemorrhaging. Without treatment, up to 20 percent of victims will die and 5 percent will require amputations, Chippaux said. Bites from cobras and mambas can also be deadly, because their venoms can cause paralysis of the muscles needed to breathe, leading to death from lack of oxygen within six hours. Chippaux and colleagues reviewed about 100 articles and clinical reports published between 1970 and 2010. They found about 314,000 cases of poisonous snake bites are reported to health care systems each year. However, many cases go unreported because people do not have easy access to health care centers, and may go to a traditional healer instead, so the researchers also looked at household surveys. They found the actual number of snakebites may be three to five times higher, or between 900,000 and 1.5 million. About 95 percent of bites occurred in rural areas, such as on plantations. Agricultural workers are therefore particularly at risk for bites, the study said. Reports from health care systems show that bites kill about 7,300 people and cause between 6,000 and 14,600 amputations each year, but based on the household surveys, the researchers said the actual numbers may be closer to 20,000 to 25,000 deaths and 30,000 amputations. More antivenom doses The number of doses of anti-venom available in Africa has dropped dramatically since the 1980s, from about 200,000 to less than 20,000. The new analysis indicated about 500,000 doses are needed each year. Chippaux said he hopes the new findings will convince political, economical and health authorities to pay attention to the problem, and understand that it is not impossible to fix. "Now we know the problem — we have solutions," Chippaux said.  The researchers announced their findings on Friday (Sept. 9); the study was published in the March issue of the journal Toxicon. Pass it on: Snakebites cause significant morbidity and mortality in sub-Saharan Africa, yet only 10 percent of victims are treated.