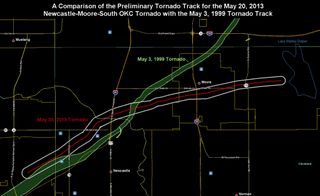 A comparison of the preliminary tornado track for the May 20 Moore, Okla., tornado with the May 3, 1999, tornado track.
(Image: © National Weather Service Norman, Okla., office)

Monday's deadly twister in Moore, Okla., struck a devastating blow to a region hit by five tornadoes in 15 years, including the strongest tornado ever recorded.

The record-breaking May 3, 1999, tornado — an EF-5 (the strength rating on the Enhanced Fujita scale) — also traced a path through Moore. Like a pair of deadly snakes, the tracks of yesterday's twister and the massive 1999 tornado twine across central Oklahoma, even crossing paths. It’s rare for two powerful tornadoes to strike the same spot, said Bob Henson, a meteorologist and science writer for the National Center for Atmospheric Research (NCAR) in Boulder, Colo.

"I don't know of two EF-4s that have struck so closely in such a large community within 15 years," Henson said. "There's no reason it can't happen, but it's very unusual." The tornado that struck Moore yesterday (May 20), was given a preliminary rating of EF-4 by the National Weather Service (NWS) office in Norman, Okla., which has sent survey teams to examine the damage and come up with a final rating.

Here are some of the ways the 1999 storm compared to yesterday's disaster:

Damage teams are still estimating the strength of Monday's storm, but the NWS' early reports said wind speeds reached up to 190 mph (305 km/h),. "Those numbers could go higher," Rick Smith, a meteorlogist at the NWS Norman, Okla., office, said at a press conference today (May 21). The tornado's path was up to a mile wide (1.6 kilometers) and the twister traveled 17 miles (27 km) on the ground. The NWS’ Norman office used the data available yesterday and today to give the preliminary rating of EF-4, but it's possible that rating will be raised to an EF-5, putting it on par with the 1999 storm. Damage survey teams still haven't reached the most heavily hit areas of Moore because of lightning and hailstorms today, Smith said.

"It's going to be a long time before we totally heal from this and recover," said Maj. Gen. Myles Deering, the adjutant general for the Oklahoma National Guard.

Henson said differences in thunderstorm activity may have concentrated the tornado's destruction in Moore yesterday.

In 1999, the deadly tornado turned slightly to the left near Moore. Tornadoes may arc to the left when they are near the end of their life cycle, Henson said. But yesterday's twister arced to the right and intensified just as it was passing over Moore. "It may be that the most intense damage is in the heart of Moore itself," Henson told OurAmazingPlanet.

The widespread destruction could earn the Oklahoma City region (Moore is in the southern part of Oklahoma City) a third spot on the list of America's costliest tornadoes. One factor in the potential cost was urban development: The city of Moore has grown by about 20 percent since the 1999 storm. "There was simply more to damage," Henson said.

A 2003 tornado that hit Moore on May 8 — but caused no fatalities — is the 10th costliest storm, at $435 million, adjusted for inflation. The costliest tornado on record is the one that struck Joplin, Mo., in May 2011, nearly two years to the day before yesterday's storm. It caused $2.8 billion in damage, in 2011 dollars.