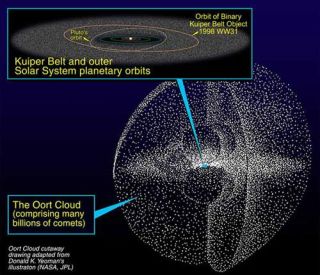 Each week, Life's Little Mysteries presents The Greatest Mysteries of the Cosmos, starting with our solar system.

Way out past the planets, a thousand times beyond even the mysterious Kuiper Belt, which itself is more than 3 billion miles away, resides the incredibly mysterious, dark and unexplored Oort Cloud.

Although we have never directly seen an object in the Oort Cloud, scientists know this great spherical swarm of rocks and ice must exist based on those comets whose orbits swoop out into this midnight abyss.

In 2015, astronomers will get their first close look at a Kuiper Belt object, Pluto, courtesy of NASA's New Horizons spacecraft. The mission could also help unlock many of the secrets that extend into the Oort Cloud, the farthest edge of our solar system. Some of these greatest mysteries of the Oort Cloud are:

Planets in the Oort?

Although according to computer models it's some 50,000 AUs nearly a light year away, the Oort Cloud might be home to many surprisingly large objects. Full-fledged worlds bigger than Earth that formed alongside the known planets might have been jettisoned out there as our own giant planets Jupiter , Saturn , Uranus and Neptune grew and migrated more than 4 billion years ago.

In other words, no one knows what's in the Oort Cloud, "It's the solar systems' attic," said Alan Stern, principal investigator for New Horizons and a planetary scientist and associate vice president in the Space Science Division at the Southwest Research Institute in Texas. "We know there were lots of planets in early days, and when Jupiter and Saturn got big they tossed most things out into interstellar space."

"The single most important question is how many planets and what types got shoved out there into deep freeze," Stern told Life's Little Mysteries. "We won't be surprised to find a Uranus." [A Field Guide to Alien Planets ]

Children from other stars

The Oort Cloud is vast, stretching a quarter of the way to the star nearest the Sun, and probably contains cosmic bodies that developed around other stars.

Our Sun almost assuredly had siblings when it formed over 4.5 billion years ago from a massive cloud of gas and dust. These dispersing relatives bequeathed some of their planetary material, or even fully grown worlds, to our Oort Cloud.

"A sizable fraction of the Oort Cloud could be captured from the Sun's early days in a star cluster," Stern said.

Astronomers have begun firming up earlier detections of exo-Kuiper Belts at expected distances from their stars. Our solar system continues to look less-and-less distinct as astronomical instruments improve, and that speaks to a greater likelihood of life as we know it in the universe.

"We expect that if solar systems like ours are common, Oort Clouds and Kuiper Belts will be as well," Stern said. "So finding these will help inform us about how common our own type of system is."