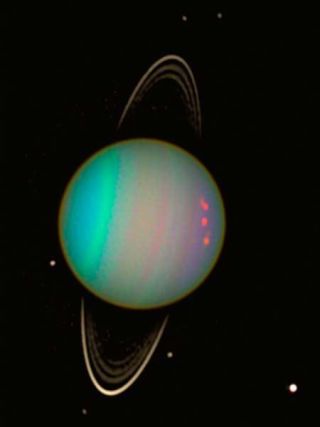 Each week, Life's Little Mysteries presents The Greatest Mysteries of the Cosmos, starting with our solar system.

More than a billion and a half miles away from Earth looms a huge, cyan-colored world pegged with a perilous name: Uranus. (For the record, modern astronomers tend to pronounce the planet's name as "YUR-inn-us" rather than the giggle-inducing alternative.)

Along with Neptune, Uranus is considered an "ice giant," a class of planets distinct from the much-larger gas giants Jupiter and Saturn. Although hydrogen and helium gas make up much of Uranus, significant quantities of water, methane and ammonia "ices" give the planet a different color and chemistry. Size-wise, Uranus' radius is four times that of Earth's, and about 16 Earths could fit inside the ice giant's sphere.

Humankind hasn't had a close look at Uranus since the Voyager 2 probe scoped it out back in 1986, and for now, a return mission is not in the offing. Until we get back out there, some major mysteries will continue to vex, including:

Why the sideways spin?

In terms of their rotation, the planets and the Sun can be thought of as spinning tops placed on a table they all whirl about on an axis more or less in the same plane.

Except for Uranus. It has an axial tilt of about 98 degrees, meaning its "north" and "south" poles are instead found where Earth's equator runs. The planet looks, quite simply, as though it has been knocked over onto its side. [Amazing Views of Uranus Thrill Skywatchers]

What could have done this? Barring any likelier alternatives, scientists wager that an Earth-size body collided with Uranus early in the solar system's history and toppled the world.

"An impact is the only mechanism we can think of to do that," said Mark Hofstadter, a senior scientist at NASA's Jet Propulsion Laboratory in Calif.

The fact that Uranus' 13 rings and couple dozen-plus moons are upended as well, encircling the planet like circles in a bullseye from our perspective, lends credence to this theory. "Perhaps before the satellites formed or finished forming, everything got tilted over," said Hofstadter.

Learning more about Uranus' interior, which unlike other planets does not fit any simple models, and comparing it to its sister world Neptune would help. "There might be some compositional evidence or just interior structure evidence that tells us that, 'Okay, this thing suffered a giant impact,'" Hofstadter told Life's Little Mysteries.

Puzzlingly, Uranus radiates little or no heat into space, another thing that makes it unique among our solar system's planets. Planets are expected to have heat leftover inside them from their formation process; Earth's interior, for example, remains hotly molten. [How Hot Is Hell? ]

That same planetary punch that sent Uranus sideways could also explain its apparent lack of internal heat. If something giant hit Uranus, that impact could have stirred up its interior, Hofstader said. "That helped bring hot material that was deep down near to the surface, and so helped Uranus cool more rapidly."

A second idea is that normal heat flow from a warm interior to a cooler surface, called convection, is not working correctly. "We hope if we learn more about Uranus' interior structure we'll see a region where convection is inhibited," said Hofstadter. "Or, if we can tell the interior is really hot, we'll know that energy is trapped in there and not making it out."

Where was Uranus born?

Recent models of how the solar system's outer planets formed and have since evolved suggest that Saturn and the two ice giants were once scrunched in much closer to Jupiter. [What If Solar System Formed Closer to the Milky Way's Edge? ]

Not long after the solar system formed, the cumulative gravitational interactions of small planetesimals whizzing around began moving Saturn, Uranus and Neptune farther away dramatically so in the ice giants' case. "They might have doubled or tripled their distance from the Sun," said Hofstadter.

In turn, this shift in the solar system's mass cleared out most of the remaining debris from the solar system's genesis. A good many icy bodies were probably hurled in toward Earth and the inner planets during this "Late Heavy Bombardment," starting 4.1 billion years ago. Water and organic material was deposited on our planet, perhaps critical for setting the stage for the development of life.

Better computer simulations with more data should help nail down this "Nice model," named after the city in France. Uncovering Uranus' history and how it has influenced our planet speaks to the possibility of life in other solar systems: According to early data from NASA's planet-hunting Kepler spacecraft, ice giants might be the most common kind of planet in the galaxy, Hofstadter said. [Uranus, Seventh Planet in Earth's Solar System, Was First Discovered Planet]

Compared to the variety of moons circling Jupiter and Saturn, Uranus' 27-strong complement of satellites is less exotic. But one moon called Miranda stands out for possessing one of the gnarliest surfaces of any known astronomical body. This small moon has deep canyons, scrapes, terraced layers and a cliff some 12.4 miles (20 kilometers) deep the deepest known in the solar system.

One theory behind Miranda's geological mess suggests that flowing ices in the moon's interior, perhaps heated by gravitational squeezing from Uranus and other moons, pushed through onto the surface. Another holds that the moon was shattered several times and came back together, creating its jagged and mottled features.

Although the former theory is more en vogue currently, "I think that both have to be on the table at this point," Hofstadter said.