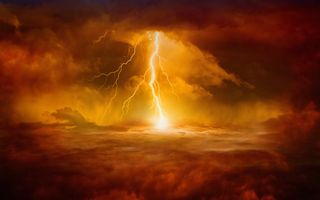 Just how hot does it need to be in order to be "hotter than hell"?

First, let's try to figure out just where hell is located. Most religions describe hell as existing deep underground. Presumably, hell is the same distance from New York as it is from Beijing or London, for example. So, for argument's sake, let's stick it at the center of the Earth, in the planet's superhot, iron core.

Scientists have yet to directly measure the temperature of the Earth's inner core, but most estimates put it at somewhere between 9,000 and 11,000 degrees Fahrenheit (5,000 and 6,000 degrees Celsius). That's pretty hot — hot enough, in fact, to melt that iron-alloy ball under normal conditions, but the constant weight of the rest of the planet pressing down on it keeps the core, which is about one-third the size of the moon, solid. (It's hot enough to melt iron, but apparently not quite hot enough to melt one's eternally damned soul.) [How Much Does a Soul Weigh? ]

Compare that with the temperature of the sun's outer layer, or photosphere, which reaches about 10,000 degrees F (5,500 degrees C), according to our sister site Space.com.

You might be wondering, "Why is the center of the Earth so hot?" Well, it's the combination of two things: First, all the radioactive materials in the Earth generate heat as they decay. Second, there's the leftover heat from the formation of the planet. When all the matter that created Earth came together, it picked up kinetic energy as it did so. When it came to rest in a proto-Earth ball, that energy had to be conserved. So it transformed into heat, which is still being emitted slowly.

The amount of this heat is gargantuan. In total, Earth radiates 46 terawatts (TW) of heat from its radioactive materials and primordial energy. To put that number into perspective, the entire world used about 16.5 TW of power in 2008, which includes the 3.3 TW of power the United States used that year, according to Climate Central.

By 2025, researchers hope to determine how much energy is left inside the Earth, said William McDonough, a professor of geology at the University of Maryland, according to a September 2016 Live Science article. When Earth finally does run out of heat, it will become "dead" like the moon, presumably giving any inhabitants of hell a break from their fiery damnation.