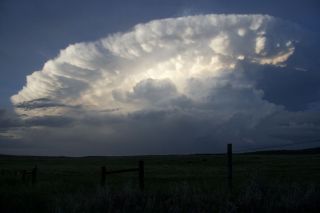 A dry thunderstorm is a storm in which the rain evaporates before reaching the ground.
(Image: © Bob Henson)

Sure the name sounds oxymoronic, but these seemingly weird weather phenomena are actually pretty common to the western United States — and they start a lot of wildfires.

Dry thunderstorms are generated when enough moisture from the Gulfs of Mexico and California is drawn over an area to form stormy clouds at high levels of the atmosphere. But because the air below the clouds is still dry, most of the rain that falls evaporates before it can quench the parched landscape below.

The storm’s lightning, appropriately dubbed dry lightning, doesn’t have the same problem though, and if it strikes dead trees or other dry fuel at the surface, a wildfire can ignite.

If it strikes you, you can die. Every year on average 66 people are killed by lightning in the United States.

Lightning strikes are the culprit behind the majority of western wildfires, and of the 240 large wildfires set off by lightning in the summers of 2004 and 2005, more than half happened when the probability of dry lightning occurring was great than 75 percent.

A new study, detailed in the May 2007 issue of the Journal of Applied Meteorology and Climatology created a model that tries to better predict the risk of dry thunderstorms to warn foresters and residents of the greater potential for wildfires.