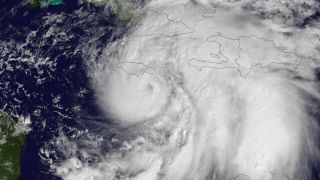 Before the beginning of this hurricane season, back in May, forecasters thought this year would be an average one. Come August, when the season typically peaks, forecasters notched up their outlook, saying the season would in fact be busier than average.

Now it's October and it's been one of the busiest seasons on record, with 19 named storms so far this year, 10 of which became hurricanes, including Hurricane Sandy, which has the potential to strike the East Coast.

That puts the 2012 Atlantic hurricane season in rarified company. Only seven seasons since 1851 (as far back as hurricane records reach) have seen 19 or more named storms. Three of these have been within the last decade: the 2010 and 2011 seasons had 19 storms each and the 2005 season had a whopping 28 storms, the most on record, including Hurricane Katrina.

Originally the National Oceanic and Atmospheric Administration predicted there would be nine to 15 named storms this year. Then, in August, it upped its prediction to 12 to 17 named storms, with five to eight of those becoming hurricanes. (Storms are named once they attain tropical storm status — defined as a rotating, organized storm with maximum sustained winds of at least 39 mph (63 kph). A tropical storm becomes a hurricane once its top winds hit at least 74 mph (119 kph). )

It's relatively unusual to have more storms than forecast, said Gerry Bell, the lead hurricane season forecaster at NOAA's Climate Prediction Center. So why has this hurricane season been busier than expected?

The underestimate can be blamed on El Niño, Bell told OurAmazingPlanet. Or rather, the lack of El Niño. Forecasters predicted that this climate pattern, characterized by warm surface temperatures in the Pacific Ocean, would have developed by now and stymied hurricane formation by its influence on the atmosphere. But it hasn't.

Blame it on El Niño

Bell said the hurricane forecast represents how many storms there are likely to be, within a 70 percent probability. In recent years their forecasts have been 95 percent accurate, he said.

This year, cyclone activity has continued longer than expected in the Atlantic, unperturbed by El Niño, which spawns high-level winds that stream eastward and can disrupt the swirling motion that gives a developing storm its power, Bell said.

"There was a strong indication that El Niño would form in time to suppress the peak of the hurricane season and El Niño just hasn't formed yet," he said.

Other climate factors also played a part in this year's season, as well as some of the other recent busy seasons.

The main reason for the recent abundance of cyclones is that since 1995, the Atlantic Ocean basin has been in the warm phase of a cyclical climate pattern called the Atlantic Multidecadal Oscillation, with hotter-than-average surface temperatures throughout the tropics and subtropics, Bell said.  This pattern lasts for about 25-40 years, and comes with more hurricanes than its "cool" phase, he said. Warm water helps hurricanes form and fuels their strength. [Storm Season! How, When & Where Hurricanes Form]

In addition, in the past few years there has also been a strong West African monsoon, which creates disturbances in the eastern Atlantic that can turn into cyclones (the generic name for hurricanes and tropical storms), Bell said. There's also been relatively weak wind shear in the tropical Atlantic where cyclones form. Wind shear is a difference in wind speed or direction between the low and high atmosphere, which tears apart developing storms. Wind shear is the main way El Niño hampers cyclone formation.

One thing that likely isn't to blame for the increase in hurricanes in recent years is global warming, Bell said. Many climate models suggest that increased temperatures could actually lead to fewer, but stronger, hurricanes worldwide, he said.

Overall it's been a very unusual hurricane season, said Phil Klotzbach, a hurricane expert at Colorado State University. While there have been 10 hurricanes, they've lasted only a total of 23 days. An average hurricane season has six hurricanes, but also about 25 hurricane days. "All that's to say, we've had a lot of short-lived hurricanes so far," he said in an email. [50 Amazing Hurricane Facts]

The cyclones this year haven't been as strong as usual, with only one major hurricane, defined as Category 3 or stronger on the Saffir-Simpson scale.

But regardless of what the hurricane season forecast is, people who live near the Atlantic or the Gulf of Mexico need to be prepared for storms, Bell said. "It only takes one big storm to hit land to cause a lot of damage."