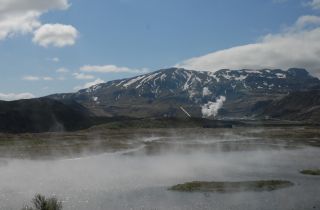 On a recent sunny afternoon in Iceland, a group of scientists filed off a bus and took in a view of geological grandeur that, nearly everywhere else on Earth, would require a deep-diving submersible. They were standing in Thingvellir, a sweeping valley surrounded by majestic cliffs; the valley is one tiny portion of a long seam between tectonic plates that runs the length of the Atlantic Ocean.

In Iceland, this seam, called the Mid-Atlantic Ridge, takes a brief jog over land before disappearing again beneath the sea. The ridge is essentially a volcanic seam many thousands of miles long, where magma is belched from deep inside the Earth, creating new crust and pushing tectonic plates apart. It moves at a rate of about 1 inch (2.5 centimeters) per year.

"You stand there, and you can imagine you're on the floor of the ocean," said Ken Verosub, a distinguished professor of geology at the University of California, Davis. He and other scientists were attending a geology conference; a field trip brought them to the only dry site that marks the meeting place of the North American plate and the Eurasian plate.

Out of the ocean

Essentially everywhere else on Earth, the volcanic seams that birth new crust and shove continents apart lie at the bottom of the sea; they are called mid-ocean ridges. [50 Amazing Facts About Earth]

"In Iceland it's sitting right at the surface," said Michael Rampino, a geologist at New York University who also attended. At Thingvellir, "you can put one foot on the North American plate and one foot on the Eurasian plate," he said.

Iceland itself is a side effect of aggressive volcanic activity along the Mid-Atlantic Ridge; it was birthed over millennia as lava burbled up and rose higher and higher on either side of the seafloor fissure. "So it's one huge volcano with a crack going down the middle of it," Rampino told OurAmazingPlanet.

"New lava comes up in the middle, and pushes the older lava to either side," Verosub told OurAmazingPlanet. "As you get farther from the rift zone, the lava flows get older and older on both sides."

When scientists figured this out, it provided evidence in support of the idea of plate tectonics — which painted a picture of a dynamic, changing planet — when the game-changing theory was still in its infancy in the 1960s.

The Mid-Atlantic Ridge cuts south from the Arctic Ocean, across Iceland, and down the middle of the Atlantic Ocean. It is the best studied of the mid-ocean ridges that score the Earth's surface in a pattern that is often said to resemble the seams on a baseball.

The other major leg of this seam runs through the Pacific Ocean, hugging its eastern shores. In 1977, it was along a smaller offshoot of this mid-ocean ridge that scientists discovered hydrothermal vents — seafloor chimneys where the volcanic activity that fuels the slow-motion drift of continents also fuels oases of life.

Scientists have discovered an ever-expanding list of species that survive on the chemicals that spew forth from these seafloor chimneys, from eyeless shrimpto vast colonies of tube worms the size of a small car.

In Iceland, the volcanic activity of its mid-ocean ridge offers myriad benefits for humans, providing the island with geothermal energy and some legendary sight-seeing — but it also poses hazards.

Rampino pointed to the 2010 eruption of Iceland's Eyjafjallajökull volcano, which halted air traffic for days. "That was a very small eruption," he said, yet it plunged international travel into chaos.

Rampino, Verosub and other scientists were gathered in Iceland in part to address how to better prepare for such events, or the much larger eruptions that could rattle Iceland.

"The goal is to better understand these eruptions, and to be able to predict or respond very fast to the volcanic effects on the atmosphere," Rampino said. "We don't want to be surprised."