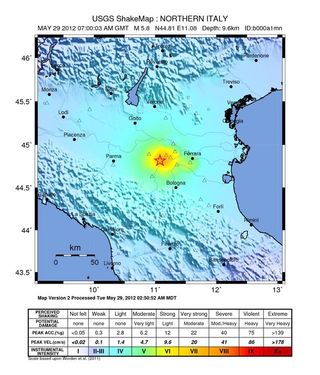 Map of the shaking intensity from the magnitude 5.8 earthquake that struck northern Italy on May 29, 2012.
(Image: © USGS)

A magnitude-5.8 earthquake rattled northern Italy this morning (May 29), just nine days after a larger quake struck an area about 11 miles (18 kilometers) away.

Today's quake, which hit at 9 a.m. local time (3 a.m. EDT), is the largest in a series of at least seven earthquakes that have shaken the region since a deadly magnitude-6.0 earthquake hit on May 20, sending piles of debris raining down onto the streets, destroying historic buildings and killing seven people.

Despite its lower magnitude, today's earthquake took a heavier toll on the population. At least 15 people were killed, and several more were trapped in the rubble, according to news reports.

Julie Dutton, a geophysicist with the U.S. Geological Survey, said the higher death toll could be a result of the location of the earthquake, or the time of day that it hit.

"There are so many different factors that it's difficult to pinpoint why there were more deaths in this particular earthquake," she told OurAmazingPlanet.

"Because it's not exactly in the same area we're not calling it an aftershock, but that doesn't mean [the two earthquakes] are not related," she added.

Both were thrust earthquakes — quakes caused by the collision of two tectonic plates. Along the sole of Italy's "boot," the African plate is plowing slowly northward and crashing into the Eurasian plate.

Today's earthquake was fairly shallow — about 10 miles (6 km) deep — yet that is to be expected for the region, Dutton said, which has a long history of earthquakes.

The most powerful quake to hit Italy in decades occurred in 2009, in central Italy, near Rome. The magnitude-6.3 earthquake struck the medieval city of L'Aquila, killing close to 300 people and causing widespread damage.

More earthquakes could be on the horizon after the latest temblor, Dutton said.

"We can't predict earthquakes, but the possibility is definitely there, so people should be aware," Dutton said.