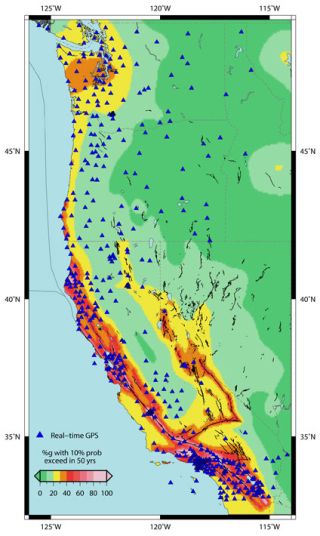 Location of the more than 500 real-time GPS monitoring stations in the western United States that make up the Real-Time Earthquake Analysis for Disaster Mitigation Network. The networks stations are overlain on a U.S. Geological Survey seismic hazard map showing areas forecast to have a 10-percent probability of exceeding a certain level of ground shaking within the next 50 years. (Areas in shades of red have the strongest shaking, while areas in green shades have the weakest shaking.)
(Image: © SGS/UC Berkeley/Scripps Institution of Oceanography )

The satellite technology that allows the GPS in your phone or car to work could now have another purpose: NASA and other government agencies will see if it can be used to monitor and measure large earthquakes.

The Real-Time Earthquake Analysis for Disaster (READI) Mitigation Network will be tested this year in the western United States. Officials say it could help emergency workers quickly respond to earthquakes and provide more-accurate tsunami warnings.

The network will use real-time GPS measurements from nearly 500 stations throughout California, Oregon and Washington. When a large earthquake is detected, GPS data will be used to automatically calculate its location, magnitude and details about the fault rupture.

Studies have shown that high-precision, second-by-second measurements of ground displacements using GPS can reduce the time needed to characterize large earthquakes and to improve the predictions of subsequent tsunamis. This could help not only Americans but people throughout the Pacific "Ring of Fire," the areas of high tectonic activity bordering the Pacific Ocean, said Craig Dobson at NASA headquarters in Washington, D.C. Dobson is the natural hazards program manager in the agency's Earth Science Division.

Calculating the strength of a tsunami requires detailed knowledge of the size of the earthquake and associated ground movements. Acquiring this type of data for very large earthquakes has been a challenge.

The GPS earthquake detection capability was first demonstrated by NASA-supported research on a major 2004 quake around the Indonesian island of Sumatra.

Assuming the network works as planned, it can then be used by the U.S. Geological Survey, which is responsible for detecting and issuing warnings on earthquakes, and the National Oceanic and Atmospheric Administration, which has the same responsibility with tsunamis.

"The relatively small investments in GPS-based natural hazards systems have revolutionized the way we view Earth and allowed us to develop this prototype system," said Frank Webb, a program manager at NASA's Jet Propulsion Laboratory in Pasadena, Calif.