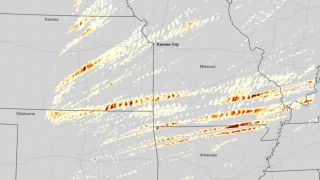 A system of hi-tech weather radars mapped the approximate tracks of the deadly tornadoes that struck overnight and early this morning (Feb. 29) across the Midwest.

The overnight storms are the latest in what has been a busy winter for severe weather. More than a dozen reported nighttime tornadoes struck across the Plains and Midwest yesterday and early this morning. Indiana and Kentucky had one reported tornado each. Kansas and Illinois had two and three reported tornadoes, respectively. Missouri saw eight possible tornadoes.

Among the storms that tore across the country overnight was the first-ever February tornado recorded in Nebraska. More severe weather — including more tornadoes — could strike today.

The above map shows the approximate tracks of yesterday's twisters. The map was created by the NEXRAD system of radars, operated by the National Oceanic and Atmospheric Administration (NOAA). NEXRAD gives meteorologists the most up-to-date information on the ground regarding severe weather, especially when it comes to identifying potential tornado outbreaks.

These radars analyze both the rotational velocity of the storm systems (the spinning of tornadoes has high rotational velocity compared to the surrounding storms) and the presence of hail. Using these data, scientists at the NOAA National Severe Storms Laboratory mapped the approximate tracks of the storms in Kansas, Missouri and Arkansas.

The tracks shown in this image are not actual confirmed ground tracks, but they are helpful in identifying features associated with tornadoes, providing warnings and aiding emergency response once a severe weather outbreak has passed

The biggest damage from the severe weather appears to be in Branson, Mo., which suffered a direct hit to its entertainment district. Multiple hotels and theaters were damaged during the severe weather, but no fatalities were reported.

At least one person was killed in Buffalo, Mo., during the storms. In Harrisburg, Ill., at least 10 people are dead after storms hit the town early today, reported Brian Wilkes, chief meteorologist with FOX 59 Indianapolis.

The storms that are spawning tornadoes are continuing to sweep across the country, with ongoing reports of possible twisters. The NOAA Storm Prediction Center has issued advisories for Tennessee and the surrounding areas for the remainder of the day.