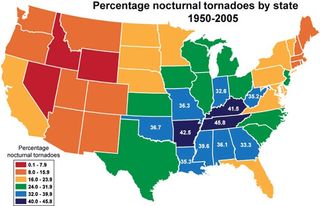 As recent tornado outbreaks around the country have shown, severe weather is getting a jump on the spring season. The main tornado season may still be weeks away, but the twisters of winter pack an extra threat. The odds of a killer tornado are greatest at night, and the shorter daylight hours of winter increase the chance of nighttime tornadoes.

Nocturnal tornadoes are more than twice as likely to kill people than daytime tornadoes, researchers have found.

More severe weather, and tornadoes, are possible today (Feb. 28) as storms roll across the mid-South. So far, the largest tornado outbreak of the year — 45 twisters — came on Jan. 22. Last Friday (Feb. 24) was the second busiest day for severe weather of the year to date.

While the main tornado season runs from spring to early summer, this year's early outbreaks show that tornadoes can form under a variety of conditions and strike during fall and winter, too. During this period, when the days are short, nighttime tornadoes are a big risk.

Nighttime tornadoes occur most frequently in the nation's mid-South region, also known as Dixie Alley. Tennessee leads the United States in the proportion of nighttime tornadoes: Nearly half  the state's tornadoes strike after dark.

From 1950 to 2005, 27 percent of U.S. tornadoes were nocturnal, yet of the ones that produced fatalities, 42 percent occurred at night, according to the study. Tornadoes striking from midnight to sunrise were 2.5 times as likely to kill as those occurring during daytime hours, researchers found.

Nighttime tornadoes are more dangerous because people are more likely to be asleep and not hear warnings, people are more often in structures that are relatively susceptible to damage, such as single-family homes and mobile homes, and the tornadoes themselves are difficult to see in the dark.

Overall, tornadoes are less common during the winter. Of the five tornado-free months since 1950, three of those were winter months, according to the National Weather Service.

Fall and spring typically see more tornadoes because they are both transitional periods when masses of warm and cool air become more likely to collide and create the thunderstorms that spawn twisters. [Infographic: How, When & Where Twisters Form]

Tornadoes form where warm, moist air is trapped underneath a layer of cold, dry air. Many of the strongest tornadoes form when the wind at around 10,000 feet (3,000 meters) above the ground blows in a different direction than the surface wind. In the spring, warm air rising in the storm system hits this so-called wind shear and is pushed from a vertical motion to a horizontal motion, creating a strong rotation.