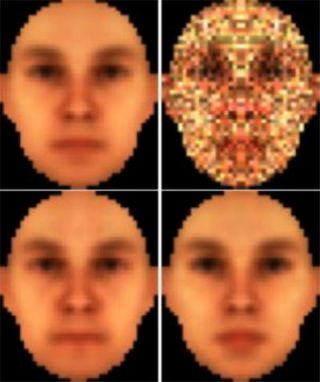 There's a new color palette for sex, and it's Christmas-y. New research suggests while male faces are red, female faces have a greenish tint.

The results, detailed online this week in the journal Psychological Science, suggest that along with other facial cues, such as shape, color can be used to pick out a guy from a gal.

Michael Tarr of Brown University was having a beer with a colleague and friend in Tübingen, Germany, when he came up with the idea for the red-and-green face study. The group was chatting about object recognition and wondered how color plays a role. Tarr's friend thought men's faces would appear green, because the stubble of beards tends to have a greenish tint, he said.

To get to the bottom of the color conundrum, Tarr and his colleagues analyzed about 200 images of Caucasian male and female faces, evenly split between genders, from a database. The faces had been photographed using a 3-D scanner under the same lighting conditions and with no make-up. Then, he used a software program to analyze the amount of red and green pigment in the faces.

The researchers also analyzed a number of other faces photographed under similar controlled conditions. They found that the male faces were more red and the female faces more green.

"Just looking at the average color in faces you can reliably tell 70 or 80 percent of the time whether it's a male or female face," Tarr told LiveScience.

But do we really use the color cue to determine a person's gender?

To find out, the team concocted androgynous images compiled from the average of 200 faces, clouding the faces with "visual noise" similar to the static on a television screen. This static either included more green or more red. The blurring of the faces took away other gender cues, such as face shape.

Tarr said the blurring phenomenon is called superstitious hallucination, and it's similar to being in the shower and hearing a doorbell or telephone ring even when neither rings. Some sound in the shower included a quality that is probably a distinguishing feature of a doorbell or phone ringing. The same thing occurs in the blurred images, with the red or green static having a characteristic that helps us to distinguish male faces from female ones.

Next, three university students looked at a series of images (with either more green or more red static) and indicated whether each was male or female. The students went through about 20,000 trials spread across 10 one-hour sessions. The faces tagged as male were redder than others, while the ones chosen as female were greener.

Why would guys be red and gals green? Tarr speculates, though he admits he has no evidence, that the color is linked with a pigment that men are known to have more of than women.

"Turns out female faces are lighter than male faces across all races," Tarr said, adding that the lighter skin somehow helps women to absorb more UV-b light to help them assimilate vitamin D for lactation, pregnancy and bone development.

The finding also has implications for facial recognition technology, advertising, as well as studies of how and why women apply make-up. So color could be another cue used by facial recognition systems or perhaps as another data point for cosmetics concoctors who could, say, make a foundation or rouge to enhance or cover up greener areas on a woman's face, Tarr said.

The research was funded by the National Science Foundation.