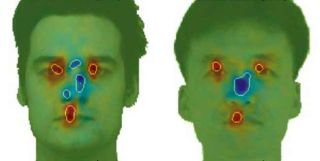 Westerners tend to look at specific features on an individual's face such as the eyes and mouth, as noted with red coloring here. East Asian observers tend to focus on the nose or the centre of the face which allows a more general view of all the features (blue areas).
(Image: © Roberto Caldara et al.)

The way people recognize faces might say a lot about what culture they come from, scientists now reveal.

These new findings may reflect a Western focus on the individual and an Eastern leaning toward the group.

The capability to routinely and effortlessly recognize faces is so universal across the globe that many scientists thought the underlying behavior involved was common in all people, regardless of culture — a matter of nature, not nurture.

Still, in the past decade, research has uncovered numerous differences among how people from the East and West perceive the world. These findings suggest that Westerners often concentrate on individual details, while East Asians tend to focus on how details relate to each other.

To see if culture shapes how we recognize faces, scientists investigated the eye movements of 14 Western Caucasian and 14 East Asian observers as they looked at faces on a computer screen. Head-mounted eye-tracking systems used miniature cameras to monitor eye movements.

"We noticed a striking difference in eye movements in Westerners and East Asian observers," said researcher Roberto Caldara, a cognitive neuroscientist at the University of Glasgow in Scotland. "We found that Westerners tend to look at specific features on an individual's face such as the eyes and mouth whereas East Asian observers tend to focus on the nose or the centre of the face which allows a more general view of all the features."

These differences are not due to genetics, "but to genuine social experience, as strategies from British-born Chinese are rather Western-like," Caldara told LiveScience.

"By disproving the long-held assumption that face processing is universally achieved, we have highlighted that the external environment, including the society in which we develop, is very influential in basic human mechanisms," Caldara said. "Caution should be taken when generalizing findings to the entire human population."

Caldara noted the findings might provide new insights "into why non-verbal interpersonal communication between people from different cultures is sometimes problematic, as gaze in direct face-to-face interactions might land in disjointed locations."

While these findings may reflect a Western inclination for the individual and an East Asian penchant for the whole, another possible cause of this cultural divide "could be that direct or excessive eye contact may be considered rude in East Asian cultures," Caldara speculated. He noted he and his colleagues are now conducting studies to discern between these possibilities.

The scientists detailed their findings online Aug. 20 in the journal PLoS ONE.