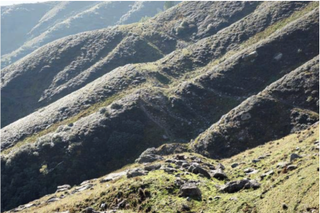 A largely ignored fault in the Himalaya, seen here with its scarp marked by foot paths, may be evidence of an ancient vanished mountain that has been pushed under the modern Himalayan mountains.
(Image: © Roger Bilham)

SAN FRANCISCO — The Kashmir Valley of the Himalayan mountains could one day experience a magnitude-9.0 earthquake, larger than was previously thought possible, according to new research.

New Global Positioning System (GPS) data revealing the gradual movement of rocks in the Zanskar Mountains north of the Kashmir Valley show that earlier estimates of the maximum possible quake in the region were too low, University of Colorado, Boulder, researcher Roger Bilham reported today (Dec. 7) at the annual meeting of the American Geophysical Union (AGU).

Instead of a maximum magnitude of 8.4 to 8.7, as had been thought, he said, the area could potentially build up enough seismic energy to experience an 8.7-to-9.0-magnitude quake. The devastating quake that struck off the coast of Japan in March 2011 was magnitude-9.0.

The researchers made this upward revision after GPS data shifted their understanding of where strain is building up in this border region between India and Pakistan. The new data showed that the potential area that could rupture in a quake is about 124 miles (200 kilometers) long by 186 miles (300 km) wide, Bilham said, about twice as large as previously expected. If strain builds up for several hundred more years, the potential magnitude could be a 9.0. If the quake were to happen tomorrow under the current amount of strain, he said, the temblor could be as large as an 8.7. [7 Most Dangerous Places on Earth]

The last megaquake to occur in the region likely happened in June 1505, Bilham said. Modern estimates peg that quake at a magnitude 9.0.

That quake destroyed Tibetan monasteries and damaged cities. Today, of course, there are millions of people living in the area, including on the vulnerable Ganges Plain of India.

But just because the region could rupture all at once doesn't necessarily mean it will.

One potential wildcard is the possible existence of an ancient mountain that has been pushed under the modern Himalaya over the last 6 million years, according to UC Boulder doctoral student Celia Schiffman. The Himalayan Mountains are the result of the Indian tectonic plate colliding with the Eurasian plate, uplifting the mountains inch by inch as they rammed into each other. But amidst these compression forces, the researchers have found faults that normally mark areas where the crust is being stretched apart. These "normal faults" may, in fact, mark the spot where a mountain has been shoved under the Himalayas, stretching the land overhead.

If this ancient buried mountain turns out to exist, it could be a good thing or a bad thing for earthquake risk. It takes more energy to rupture a feature like the mountain, Schiffman told OurAmazingPlanet, so it's possible it could act as a barrier to a potential earthquake, limiting the amount of earth that would rupture and thus the eventual magnitude of a quake.

The mountain might instead be a point of stress where the crust "locks up," delaying the time between quakes but building more and more strain. If that's the case, the eventual earthquake would be larger in magnitude. Researchers can't yet tell which way it will go, Bilham said.

After many years of conservative estimates of potential quake magnitude, seismologists are working to be more realistic in their predictions, Bilham said. The 9.0 Japan quake was supposed to be an 8.0-magnitude maximum, he said. Likewise, the 2008 magnitude-7.9 that struck the Sichuan region of China was forecasted to be no bigger than a magnitude-7.

"There is now a new level of realism in our overt forecasts of what could occur," Bilham said. In the Kashmir region, he said, "you have two nuclear powers facing each other armed to the teeth and fighting over a piece of real estate that is going to have a huge amount of damage to the military establishment and to the population, of course."