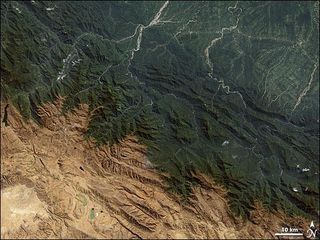 More than 7,000 kilometers (4,400 miles) long and more than 500 kilometers (300 miles) wide in places, the Andes Mountains encompass a wide range of climates and habitats, from snow-capped mountain peaks to rainforests to high deserts. This picture, acquired by NASA’s Landsat 7 satellite, shows a dramatic change in landscape about 250 kilometers southeast of la Paz, the capital of Bolivia.
(Image: © NASA)

Millions of people living near the Andes Mountains face a significantly higher risk of a giant earthquake than previously thought, and such a temblor could be more than 10 times stronger than anything the region has expected in the past.

Scientists investigated the Subandean margin along the eastern flank of the Andes Mountains, an area that includes Bolivia. A recent hazard assessment estimated a maximum earthquake there of magnitude 7.5.

Now, however, researchers unexpectedly find that a giant quake of up to magnitude 8.9 is possible, threatening more than 2 million people living in the area, where the infrastructure is not designed for a temblor that big.

"If the entire fault below the Subandes were to rupture, you can get a lot of damage," researcher Benjamin Brooks, a geodesist at the University of Hawaii in Honolulu, told OurAmazingPlanet. "It could be like a combination of the 2010 earthquake in Chile, which was very powerful, with the 2010 earthquake in Haiti, which hit a place with inadequate building standards."

The scientists used global positioning satellite data to map movement of the Earth's surface in the Subandean margin. They discovered that west-to-east surface movements measure 2 to 10 millimeters less per year over a stretch up to about 60 miles long (100 kilometers) than in the area’s surroundings.

These findings suggest that a shallow part of the east of the region is locked in place, causing stress to build up as the Nazca oceanic tectonic plate slowly grinds against the South American tectonic plate. If this entire section were to rupture in one earthquake, the result could be shaking of magnitudes 8.7 to 8.9, they estimated.

"The city of Santa Cruz in Bolivia is at the central portion of this area, a major economic center. The oil industry is located there, as is a lot of farming," Brooks said. “The shaking from a major earthquake in this area could also affect northern Argentina."

The researchers also found surface evidence of past repeated large earthquakes. "We need to go down and dig trenches to do paleoseismology — investigate how the faults there ruptured in the past, get an idea of when those happened and their sizes, to get an idea of what the future might be like," Brooks said.

The scientists detailed their findings online May 8 in the journal Nature Geoscience.