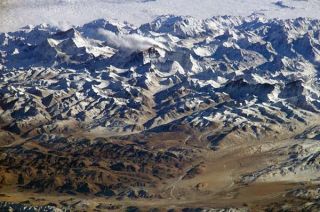 UPDATE: The paper related to this research has been retracted by the journal Geology. The article below remains as originally published, but should no longer be considered valid.

An epic collision between two ancient continents pushed the Himalayas up fom the Earth's surface. That much is known, but a new study reveals how deep the unseen wreckage penetrated underground.

Sprawling sections of the Earth's crust the rocky plates floating on the scorching, molten rock inside the Earth, known as the mantle collided under what are now India and Asia some 90 million years ago.

Like an 18-wheeler crashing head-on with a pickup truck, the larger Asian plate forced the Indian plate deep into the mantle a process called subduction sinking it at least 155 miles (250 kilometers) down under the surface, a new study in the May edition of the journal Geology suggests. This plunge is double the depth of previous estimates.

"The subduction of continental crust to this depth has never been reported in the Himalayas and is also extremely rare in the rest of world," said study co-author Anju Pandey of the National Oceanography Centre in Southampton, England.

The collision site forms the roots of the Himalayas, so Pandey and her colleagues cracked open rocks from the mountain range and uncovered a mineral called majorite that is formed at least 125 miles (200 km) below the Earth's surface, which allowed the researchers to pinpoint the depth of the Indian continental crust. Mount Everest in the Himalayas, the world's tallest mountain, rises 29,029 feet (8,848 meters), or 5.5 miles (8.8 km) above sea level.

Majorite is stable only under ultra-high pressure conditions where it acts like an oxygen sponge that keeps the Earth from becoming dry and inhospitable like Mars. As the Earth's crust continues to shift, majorite is pulled to the Earth's surface, where it breaks down and releases oxygen, over millions of years.

Researchers already knew that colliding continental plates push up mountain ranges, ignite volcanic eruptions, and trigger earthquakes, but the details of what is happening on the other end of the crash, deep within the Earth's mantle, has been hotly debated.

"Our findings are significant because researchers have disagreed about the depth of subduction of the Indian plate beneath Asia," Pandey said.

In fact, the previous depth estimates conflicted with estimates based on computer models. The new results suggest that the leading edge of the Indian plate sank to a depth around double that of previous estimates.

"Our results are backed up by computer modeling and will radically improve our understanding of the subduction of the Indian continental crust beneath the Himalayas," Pandey said.

The new discovery may shift the way researchers think about the basics of Himalayan tectonics, such as the rate at which the Himalayas are rising.