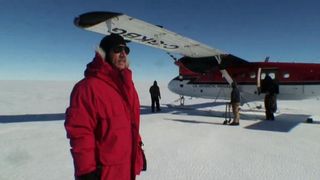 Glaciologist Robert Bindschadler was the first person to ever walk on the Pine Island Glacier ice shelf, in January 2008.
(Image: © NASA.)

A few weeks from now, a tiny tent city will spring up on a lonely chunk of ice attached to the western edge of Antarctica, and a group of scientists will begin the first ever drilling project in a spot that sits at ground zero in one of the most remote, least understood and most rapidly changing environments on Earth.

The team of 13 scientists will spend six weeks living out on the Pine Island Glacier ice shelf — a vast plain of floating ice roughly 1,235 square miles (2,300 square kilometers) across and nearly a third of a mile (500 meters) thick — in an attempt to see what forces are at work beneath the shelf, and causing the glacier that feeds it to slide ever more rapidly into the sea.

The glaciers in this western region of the Antarctic are responsible for 7 percent of global sea level rise, and of those speedy glaciers, the Pine Island Glacier is moving the fastest, at a clip of about 2.5 miles (4 km) per year.

"This is where Antarctica is hemorrhaging ice and raising sea levels, and this is where we have to go," said Robert Bindschadler, a NASA glaciologist and leader of the expedition.

Under the ice shelves

Bindschadler and several fellow team members discussed the upcoming expedition's aims, methods and the treacherous conditions the group will likely face throughout their time on the ice, during a teleconference today put on by NASA and the National Science Foundation (NSF), the two sponsors of the project.

Although satellite observations of Antarctica provide clear evidence that glaciers are thinning and ice is melting, and that the heat is coming from the surrounding ocean, spying on the region from space has its limitations.

"Satellites can tell us where it's happening, but they can't give us a detailed view of the process itself, because that's taking place underneath the floating ice shelf," Bindschadler said.

The scientists will pierce the ice shelf with a hot water drill, and bore several 8-inch (20-centimeter) holes through more than 1,500 feet of ice to reach the ocean water below. Instruments that measure variables such as temperature, salinity and currents will be lowered on long cables and parked at varying depths, and, over the course of the expedition, monitor how those factors change from week to week. In addition, the scientists will use radar technology to image the geology of the seafloor beneath.

It is a Herculean undertaking, and one that has required years of planning and practice. The project's field work kicked off in late 2007, with a reconnaissance mission to the ice shelf, but logistics and the region's harsh conditions thwarted attempts to begin drilling until this year.

The team will be camped in a landscape riddled with hidden crevasses, and confront frequent storms, 55-mph (88-kph) winds, and temperatures that hover around 15 degrees Fahrenheit (minus 10 degrees Celsius) — in a spot that is 1,400 miles (2,200 km) from McMurdo Station, the closest pocket of civilization. That's roughly the distance from Washington, D.C., to Bismarck, N.D., "but with no service stations in between," said Scott Borg, director of Antarctic sciences at the NSF. [Images: Living in Antarctica]

The researchers said that the scientific community still has much to learn about ice shelves and the forces that are changing them; and the Pine Island Glacier is particularly interesting since it is the largest outlet for the Western Antarctic Ice Sheet, which, if melted completely, would raise sea levels by 16 feet (5 m).

"We honestly don't know what lies in store for the Pine Island Glacier ice shelf," Bindschadler said, but added that scientists do know it is thinning and retreating.

Once the team has data in hand, they will deliver it to scientists who model climate change, in an attempt to better predict what lies in store for the ever-changing polar region.

The Pine Island Glacier ice shelf recently cracked, part of a natural process by which large icebergs break off and float out to sea, and team members said they hoped to witness the moment when the huge berg is severed from the shelf and floats away.

In spite of the extreme living conditions the team will face, Bindschadler said the group was excited to finally have boots on the ground.

"It is hard, but it's work that we're all really keen on engaging in," he said. "The rewards vastly exceed the difficulties we have to overcome."