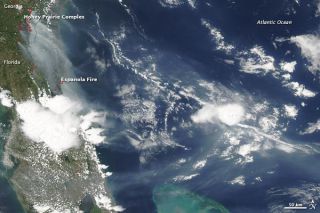 Smoke from fires in Georgia and Florida streamed eastward over the Atlantic Ocean on June 15, 2011. The Moderate Resolution Imaging Spectroradiometer (MODIS) on NASA's Aqua satellite captured this natural-color image the same day.

Red outlines indicate actively burning fires . The Honey Prairie Complex Fire produces most of the smoke, but significant smoke also arises from the Espanola Fire. Distinguishable from clouds by its darker color and less distinct margins, the smoke extends hundreds of kilometers east of the coast.

Smoke from Honey Prairie Complex Fire, along with smoke from the Wallow Fire in Arizona , affected air quality in the U.S. Southeast and Mississippi Valley in mid-June 2011, according to the U.S. Air Quality Smog Blog.