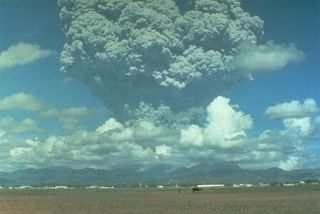 A large eruption occurred at Pinatubo on June 12, sending up a cloudy plume that reached an altitude of nearly 12 miles (19 km). This was the first in a series of powerful eruptions that would culminate on June 15 with the largest land eruption living history has seen.
(Image: © USGS)

History has seen some monstrous eruptions of volcanoes, from Mount Pinatubo's weather-cooling burp to the explosion of Mt. Tambora, one of the tallest peaks in the Indonesian archipelago.

The power of such eruptions is measured using the Volcanic Explosivity Index (VEI) a classification system developed in the 1980 that's somewhat akin to the magnitude scale for earthquakes. The scale goes from 1 to 8, and each succeeding VEI is 10 times greater than the last.

There haven't been any VEI-8 volcanoes in the last 10,000 years, but human history has seen some powerful and devastating eruptions. Because it's extremely difficult for scientists to be able to rank the strength of eruptions in the same VEI category, here we present the 10 most powerful volcanoes within the last 4,000 years (within human records) first in order of strength, then within each category, in chronological order.

But let's start with a supervolcano eruption surprisingly close to home, registering a magnitude-8, from our distant past (scroll up and hit the "Next" button).

The entire Yellowstone National Park is an active volcano rumbling beneath visitors' feet. And it has erupted with magnificent strength: Three magnitude-8 eruptions rocked the area as far back as 2.1 million years ago, again 1.2 million years ago and most recently 640,000 years ago. "Together, the three catastrophic eruptions expelled enough ash and lava to fill the Grand Canyon," according to the U.S. Geological Survey. In fact, scientists discovered a humongous blob of magma stored beneath Yellowstone, a blob that if released could fill the Grand Canyon 11 times over, the researchers reported on April 23, 2013, in the journal Science.

The latest of the trio of supervolcano eruptions created the park's huge crater, measuring 30 by 45 miles across (48 by 72 kilometers).

The chance of such a supervolcano eruption happening today is about one in 700,000 every year, Robert Smith, a seismologist at the University of Utah in Salt Lake City, told Live Science previously.

Next Up: Largest eruption in history

This peak was the site of South America's largest volcanic eruption in recorded history. The explosion sent mudflows as far as the Pacific Ocean, 75 miles (120 km) away, and appears to have affected the global climate. The summers following the 1600 eruption were some of the coldest in 500 years. Ash from the explosion buried a 20-square-mile (50-square-km) area to the mountain's west, which remains blanketed to this day.

Although Huaynaputina, in Peru, is a lofty 16,000 feet (4,850 meters), it's somewhat sneaky as volcanoes go. It stands along the edge of a deep canyon, and its peak doesn't have the dramatic silhouette often associated with volcanoes.

The 1600 cataclysm damaged the nearby cities of Arequipa and Moquengua, which only fully recovered more than a century later.

Next Up: The infamous Krakatoa

The rumblings that preceded the final eruption of Krakatoa (also spelled Krakatau) in the weeks and months of the summer of 1883 finally climaxed with a massive explosion on April 26-27. The explosive eruption of this stratovolcano, situated along a volcanic island arc at the subduction zone of the Indo-Australian plate, ejected huge amounts of rock, ash and pumice and was heard thousands of miles away.

The explosion also created a tsunami, whose maximum wave heights reached 140 feet (40 meters) and killed about 34,000 people. Tidal gauges more than 7,000 miles (11,000 km) away on the Arabian Peninsula even registered the increase in wave heights.

While the island that once hosted Krakatoa was completely destroyed in the eruption, new eruptions beginning in December 1927 built the Anak Krakatau ("Child of Krakatau") cone in the center of the caldera produced by the 1883 eruption. Anak Krakatau sporadically comes to life, building a new island in the shadow of its parent.

The Santa Maria eruption in 1902 was one of the largest eruptions of the 20th century. The violent explosion in Guatemala came after the volcano had remained silent for roughly 500 years, and left a large crater, nearly a mile (1.5 km) across, on the mountain's southwest flank.

The symmetrical, tree-covered volcano is part of a chain of stratovolcanoes that rises along Guatemala's Pacific coastal plain. It has experienced continuous activity since its last blast, a VEI 3, which occurred in 1922. In 1929, Santa Maria spewed forth a a pyroclastic flow (a fast-moving wall of scalding gas and pulverized rock), which claimed hundreds of lives and may have killed as many as 5,000 people.

The eruption of Novarupta one of a chain of volcanoes on the Alaska Peninsula, part of the Pacific Ring of Fire, was the largest volcanic blast of the 20th century. The powerful eruption sent 3 cubic miles (12.5 cubic km) of magma and ash into the air, which fell to cover an area of 3,000 square miles (7,800 square km) in ash more than a foot deep.

A stratovolcano located in a chain of volcanoes in Luzon, Philippines, created along a subduction zone, the cataclysmic eruption of Pinatubo was a classic explosive eruption.

The eruption ejected more than 1 cubic mile (5 cubic kilometers) of material into the air and created a column of ash that rose up 22 miles (35 km) in the atmosphere. Ash fell across the countryside, even piling up so much that some roofs collapsed under the weight.

The blast also spewed millions of tons of sulfur dioxide and other particles into the air, which were spread around the world by air currents and caused global temperatures to drop by about 1 degree Fahrenheit (0.5 degree Celsius) over the course of the following year.

The 257-square-mile (665-square-km) volcanic island, part of the Republic of Vanuatu, a tiny nation in the southwestern Pacific Ocean, witnessed one of the most impressive eruptions in history, one that sent a wave of scalding ash and dust down the mountain and formed a caldera 7.5 miles (12 km) wide.

The volcano has continued to be one of the most active in the world. It has erupted close to 50 times since 1774, and has proved a dangerous neighbor for the local population. In 1894, six people were killed by volcanic bombs and four people were overtaken by lava flows, and in 1979, acid rainfall caused by the volcano burned some inhabitants.

Although this mountain in central El Salvador, just a few miles east of the capital city San Salvador, has experienced only two eruptions in its history, the first known eruption was a doozy. It blanketed much of central and western El Salvador with pumice and ash, and destroyed early Mayan cities, forcing inhabitants to flee.

Trade routes were disrupted, and the centers of Mayan civilization shifted from the highland areas of El Salvador to lowland areas to the north and in Guatemala.

The summit's caldera is now home to one of El Salvador's largest lakes.

Geologists think that the Aegean Islands volcano Thera explodedwith the energy of several hundred atomic bombs in a fraction of a second. Though there are no written records of the eruption, geologists think it could be the strongest explosion ever witnessed.

The island that hosted the volcano, Santorini (part of an archipelago of volcanic islands in Greece), had been home to members of the Minoan civilization, though there are some indications that the inhabitants of the island suspected the volcano was going to blow its top and evacuated. But though those residents might have escaped, there is cause to speculate that the volcano severely disrupted the culture, with tsunamis and temperature declines caused by the massive amounts of sulfur dioxide it spewed into the atmosphere that altered the climate.

Also known as the Baitoushan Volcano, the eruption spewed volcanic material as far away as northern Japan, a distance of approximately 750 miles (1,200 kilometers). The eruption also created a large caldera nearly 3 miles (4.5 km) across and a half-mile (nearly 1 km) deep at the mountain's summit. It is now filled with the waters of Lake Tianchi, or Sky Lake, a popular tourist destination both for its natural beauty and alleged sightings of unidentified creatures living in its depths.

Located on the border of China and North Korea, the mountain last erupted in 1702, and geologists consider it to be dormant. Gas emissions were reported from the summit and nearby hot springs in 1994, but no evidence of renewed activity of the volcano was observed.