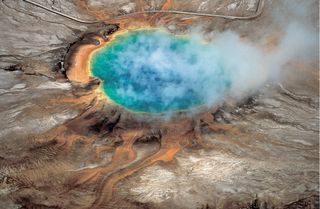 Yellowstone National Park's Grand Prismatic hot spring is one of the many hydrothermal features that are created by the Yellowstone supervolcano. Such springs reveal the churning activity happening beneath the surface there.
(Image: © "Windows into the Earth," Robert B. Smith and Lee J. Siegel)

A giant blob-shaped reservoir of searing-hot rock has been discovered far below the supervolcano underneath Yellowstone National Park — one that could fill the Grand Canyon more than 11 times over, researchers say.

The discovery doesn't raise the risk of future eruptions at Yellowstone, the study authors said. However, a better understanding of the Yellowstone supervolcano's plumbing could shed light on any hazards it might pose, scientists added.

The newfound blob-shaped magma reservoir lies in the lower crust, scientists reported today (April 23) in the journal Science. The molten rock extends from about 12 to 28 miles (19 to 45 kilometers) deep, and measures about 30 miles (48 km) long northwest to southeast and 44 miles (70 km) long southwest to northeast. This magma reservoir is about 11,200 cubic miles (46,700 cubic km) in size. [National Parks Gallery: See Photos of Yellowstone and Yosemite]

Previous studies had identified an oddly shaped magma chamber closer to the surface of the Yellowstone supervolcano, one 2,500 cubic miles (10,420 cubic km) in size, enough to fill the Grand Canyon about 2.5 times. This chamber looks like a gigantic frying pan, with a "handle" rising to the northeast, measuring about 19 miles (30 km) long from northwest to southeast and 55 miles (90 km) long southwest to northeast. This chamber lies about 3 to 9 miles (5 to 14 km) beneath the surface of Yellowstone National Park.

Scientists think the "frying pan" magma chamber is filled with both melted rock, or magma, and hot crystals — a mixture similar to a syrupy, shaved-ice dessert.

However, the shallow magma chamber discovered previously was too small to account for the amount of material ejected by past Yellowstone eruptions. Scientists also could not explain the very high levels of carbon dioxide escaping from the area.

Scientists said the newly found magma chamber connects the smaller reservoir above it to the mantle plume below it.

"For the first time, we have imaged the continuous volcanic plumbing system under Yellowstone," study lead author Hsin-Hua Huang, a seismologist at the University of Utah, said in a statement.

Supervolcanoes are capable of eruptions surpassing anything ever recorded by humanity. There are roughly a dozen supervolcanoes on Earth today, and one of the largest encompasses Yellowstone National Park. The park is a caldera, or giant crater, that is about 40 by 25 miles (65 by 40 kilometers) in size. Each of three cataclysmic supervolcano eruptions at Yellowstone pelted much of North America with volcanic ash. [Big Blasts: History's 10 Most Destructive Volcanoes]

The Yellowstone supervolcano's last cataclysmic eruption took place about 640,000 years ago, although lava seeped onto the surface in the area as recently as 70,000 years ago. A supervolcano eruption today would be cataclysmic, but the chance for one at Yellowstone is maybe one in 700,000 every year, said study co-author Robert Smith, a seismologist at the University of Utah in Salt Lake City.

To learn more about the Yellowstone supervolcano and the risk it might pose, the research team probed the Earth's crust with seismic waves, much like the way in which medical scans can image broken bones.

The researchers developed a complete picture of the Yellowstone supervolcano's innards by combining two kinds of seismic information — data from local quakes detected in Utah, Idaho, the Teton Range and Yellowstone by the University of Utah, and data from more distant quakes detected by the EarthScope array of seismometers. Seismic waves travel faster through cold rock and slower through hot and molten rock.

The researchers emphasized that the Yellowstone supervolcano is no closer to erupting than before. "This finding does not change the volcano hazard evaluation of Yellowstone that has already been assessed," Farrell said. "These findings do not tell us if a future eruption of Yellowstone is more or less likely."

By understanding how supervolcano plumbing works, scientists can now develop new models to better estimate the hazards they pose, said study co-author Fan-Chi Lin, a seismologist at the University of Utah.

"Our study opens up many new directions and future opportunities in volcano research," Farrell said. "For example, it will be interesting to see if the existence of the lower crustal magma reservoir is a common feature for all the volcanic systems around the globe."