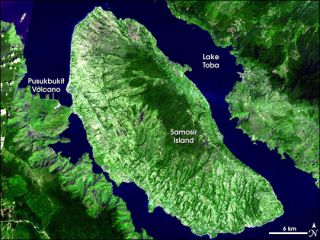 About 70,000 years ago, the Toba Supervolcano erupted in what is now Indonesia. After the eruption, the ground collapsed and left behind a depression called a caldera, which is not filled by Lake Toba and volcanic domes that have emerged in the time since, as seen in this set of images taken Jan. 28, 2006, by NASA's Terra satellite and then stitched together.
(Image: © NASA/GSFC/MITI/ERSDAC/JAROS, and the U.S./Japan ASTER Science Team)

A supervolcanic eruption thought to have nearly driven humanity extinct may not have endangered the species after all, a new investigation suggests.

Supervolcanoes are capable of eruptions dwarfing anything ever seen in recorded history, expelling thousands of times more magma and ash than even a Mount St. Helens or Pinatubo. A supervolcanic eruption could wreak as much havoc as the impact of a mile-wide asteroid,by blotting out the sun with ash, reflecting its rays and cooling the Earth — a phenomenon called a "volcanic winter." A dozen or so supervolcanoes exist today, some of them lying at the bottom of the sea.

The largest supervolcano eruption of the past 2.5 million years was a series of explosions of Mount Toba on the Indonesian island of Sumatra about 75,000 years ago. Researchers say Toba spewed out a staggering 700 cubic miles (2,800 cubic kilometers) of magma, equivalent in mass to more than 19 million Empire State Buildings. By comparison, the infamous blast from the volcanic Indonesian island of Krakatoa in 1883, one of the largest eruptions in recorded history, released about 3 cubic miles (12 cubic km) of magma.

About the same time the eruption took place, the number of modern humans apparently dropped cataclysmically, as shown by genetic research. People today evolved from the few thousand survivors of whatever befell humans in Africa at the time. The giant plume of ash from Toba stretched from the South China Sea to the Arabian Sea, and in the past investigators proposed the resulting volcanic winter might have caused this die-off. [Countdown: History's Most Destructive Volcanoes]

However, recently scientists have suggested that Toba did not sway the course of human history as much as previously thought. For instance, prehistoric artifacts discovered in India and dating from after the eruption hinted that people coped fairly well with any effects of the eruption.

Now researchers have found that the evidence shows Toba didn't actually cause a volcanic winter in East Africa where humans dwelled.

"We have been able to show that the largest volcanic eruption of the last two million years did not significantly alter the climate of East Africa," said researcher Christine Lane, a geologist at the University of Oxford.

Lane and her colleagues examined ash from Toba recovered from mud extracted from two sites at the bottom of Lake Malawi, the second largest lake in the East African Rift Valley.

"We first started looking for the Toba ash a few years back, but it's a bit like looking for a needle in a haystack, so it took a while," Lane told OurAmazingPlanet. "Between myself and my co-author Ben Chorn, we systematically processed every centimeter of sediment between 24 to 46 meters [78 to 150 feet] depth in the central basin core. The layer is so small that if we leave any gaps in our search, we could miss it completely."

Their analysis discovered that a thin layer of ash in this sediment about 90 feet (27 m) below the lake floor was from the last of the Toba eruptions, known as Youngest Toba Tuff.

"The Toba super-eruption dispersed huge volumes of ash across much of the Indian Ocean, Indian Peninsula and South China Sea," Lane said. "We have discovered the layer of volcanic ash was carried about twice the distance as previously thought, over more than 7,000 kilometers [4,350 miles]."

The amount of ash found in the Malawi sediment core (a cylindrical log of sediment drilled from the ground), was more than the scientists expected to find.

"I was surprised to find so much ash in the Lake Malawi record," Lane added. "The ash is very tiny, composed of shards of volcanic glass smaller than the diameter of a human hair. Nevertheless, in a lot of records I have worked on previously, even within just a few hundreds of miles of an eruption center, we sometimes only find less than 100 shards of glass within a gram of sediment. In Malawi, we have thousands of shards of glass per gram, which really shows how voluminous the Youngest Toba Tuff was."

If the area had seen dramatic cooling because of all the ash spewed into the atmosphere, living matter near the lake surface would likely have died off, significantly altering the composition of the lake's mud. However, when the researchers investigated algae and other organic matter from the layer that contained the ash from Toba, they saw no evidence of a significant temperature drop in East Africa. Apparently, "the environment very quickly recovered from any atmospheric disturbance that may have occurred," Lane said.

But these results, detailed online April 29 in the journal Proceedings of the National Academy of Sciences, don't mean that super-eruptions aren't as big a risk to Earth's denizens as previously suggested.

"It is important to realize that every volcanic eruption is different and the Youngest Toba Tuff provides only one example," Lane said. "The impact of an eruption depends not just on the amount of ash erupted, but also the composition and volume of aerosols, how high in the atmosphere the ash is injected and the meteorological conditions at the time."

As for what might explain the near-extinction humanity apparently once experienced, perhaps another kind of catastrophe, such as disease, hit the species. It may also be possible that such a disaster never happened in the first place — genetic research suggests modern humans descend from a single population of a few thousand survivors of a calamity, but another possible explanation is that modern humans descend from a few groups that left Africa at different times.

Future research will analyze what effects Toba may or may not have had on other lakes in East Africa.

"Whilst from this we can hypothesize that the global climatic impact was not as dramatic as some have suggested, we will need to find similarly high-resolution records of past climate from other regions that also contain Youngest Toba Tuff in order to definitively test this," Lane said.