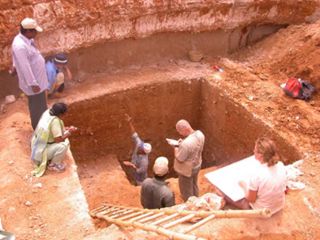 Excavation below the ash produced by the Toba volcanic eruption revealed a Middle Paleolithic, or Stone Age, layer.
(Image: © Science)

An ancient volcanic super-eruption, one of the largest known in Earth's history, may not have devastated the world and humanity as much as once thought.

The eruption at what is now Lake Toba in the Indonesia island of Sumatra roughly 75,000 years ago was the largest in the last 2 million years. This gigantic blast released at least 7.7 trillion tons or 670 cubic miles of magma, equivalent in mass to more than 19 million Empire State Buildings.

Vast plumes of ash stretched from the South China Sea to the Arabian Sea and likely blotted out the sun and drastically cooled the Earth for years—a "volcanic winter." Scientists have suggested the environmental catastrophe that might have resulted could have influenced the course of human history, with people today evolving from the few thousand survivors of that disaster.

Newly unearthed prehistoric artifacts now suggest the blast might not have been "as catastrophic as before thought," said Cambridge University archaeologist Michael Petraglia.

Petraglia and his colleagues investigated deposits of ash from Toba more than eight feet thick near the southern Indian village of Jwalapuram. They found hundreds of stone blades and other tools just below and above this ash layer—effectively immediately before and after the eruption—that are fairly similar to each other. With the artifacts, they also found pieces of red ochre, a mineral used for body art and cave drawings, as well as for helping to stick tools together.

The artifacts appeared similar to some from modern humans dating to around the same time period in Africa. These findings suggest humans continued to live in the area after the blast.

"We would have had very mobile populations of hunter-gatherers here, able to cope with all sorts of disasters," Petraglia told LiveScience. "If we were talking about settled people with agriculture, the Toba super-eruption would have been a cataclysm."

The research was detailed in the July 6 issue of the journal Science.

Not everyone thinks the new evidence is convincing. Anthropological archaeologist Stanley Ambrose at the University of Illinois at Urbana-Champaign, who proposed that the Toba catastrophe influenced human evolution, found the published data inadequate.

"The only way to prove their assertions is to find human skeletons below the ash that look like Africans," Ambrose said.

An exciting but controversial aspect of their findings is that modern humans got out of Africa far earlier than was thought. "For the last 150 years, archaeologists have concentrated on when modern humans got out of Africa into Europe, but our findings suggest they might have gotten to India 30,000 years before they got to Europe," Petraglia said.

"There's a lot of really remarkable archaeology that can be done in India that we're excited about exploring," he said.