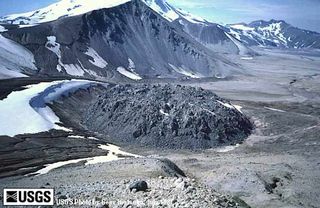 An aerial view of the Novarupta Dome in Alaska taken on July 29, 1987.
(Image: © USGS/Gene Iwatsubo)

In June 1912, Novarupta--one of a chain of volcanoes on the Alaska Peninsula--erupted in what turned out to be the largest blast of the twentieth century. It was so powerful that it drained magma from under another volcano, Mount Katmai, six miles east, causing the summit of Katmai to collapse to form a caldera half a mile deep. Novarupta also expelled three cubic miles of magma and ash into the air, which fell to cover an area of 3,000 square miles more than a foot deep.

Despite the fact that the eruption was comparable to that of the far more famous eruption of Krakatau in Indonesia in 1883 and so near the continental United States, it was hardly known at the time because the area was so remote from English-speaking people.

Almost a hundred years later, researchers are paying attention. Novarupta is near the Arctic Circle and its impact on climate appears to be quite different from that of "ordinary" tropical volcanoes, according to recent research by climatologists using a NASA computer model.

When a volcano anywhere erupts, it does more than spew clouds of ash, which can shadow a region from sunlight and cool it for a few days. It also spews sulfur dioxide. If the eruption is strongly vertical, it shoots that sulfur dioxide high into the stratosphere more than 10 miles above Earth.

Up in the stratosphere, sulfur dioxide reacts with water vapor to form sulfate aerosols. Because these aerosols float above the altitude of rain, they don't get washed out. They linger, reflecting sunlight and cooling Earth's surface.

This can create a kind of nuclear winter (a.k.a. "volcanic winter") for a year or more after an eruption. In April 1815, for instance, the Tambora volcano in Indonesia erupted. The following year, 1816, was called "the year without a summer," with snow falling across the United States in July. Even the smaller June 1991 eruption of Pinatubo in the Philippines cooled the average temperature of the northern hemisphere summer of 1992 to well below average.

But both those volcanoes as well as Krakatau were in the tropics.

Novarupta is just south of the Arctic Circle.

Using a NASA computer model at the the Goddard Institute for Space Studies (GISS), Prof. Alan Robock of Rutgers University and colleagues found that Novarupta's effects on the world's climate would have been different. (Their research was funded by the National Science Foundation.)

Robock explains: "The stratosphere's average circulation is from the equator to the poles, so aerosols from tropical volcanoes tend to spread across all latitudes both north and south of the Equator." Aerosols would quickly circulate to all parts of the globe.

But the NASA GISS climate model showed that aerosols from an arctic eruption such as Novarupta tend to stay north of 30?N--that is, no further south than the continental United States or Europe. Indeed, they would mix with the rest of Earth's atmosphere only very slowly.

This bottling up of Novarupta's aerosols in the north would make itself felt, strangely enough, in India. According to the computer model, the Novarupta blast would have weakened India's summer monsoon, producing "an abnormally warm and dry summer over northern India," says Robock.

Why India? Cooling of the northern hemisphere by Novarupta would set in motion a chain of events involving land and sea surface temperatures, the flow of air over the Himalayan mountains and, finally, clouds and rain over India. It's devilishly complex, which is why supercomputers are needed to do the calculations.

To check the results, Robock and colleagues are examining weather and river flow data from Asia, India, and Africa in 1913, the year after Novarupta. They are also investigating the consequences of other high-latitude eruptions in the last few centuries.

Do Indians need to keep an eye on Arctic volcanoes? The GISS computer says so.