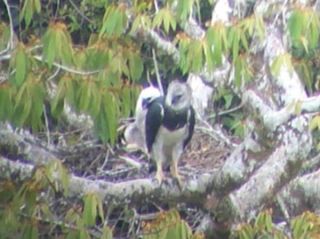 In a frame from a video, a mother harpy eagle guards her nestling.
(Image: © William Garcia, BFREE.)

Rare harpy eagles have been found in a remote area of Belize, a discovery that has elated researchers. Until now, the massive predatory birds were thought to be extinct in the region.

Two adult harpies and one five-week old nestling were discovered in November, during patrols of the Bladen Nature Reserve in the Mayan Mountains of Belize, a rugged, isolated area where scientists have searched for signs of the bird since 2005, when an adult was first spotted.

Harpy eagles are known as the most powerful raptor in the Americas. The birds weigh up to 20 pounds (9 kilograms) and have wingspans up to 7 feet (2 meters). They hunt prey as large as monkeys and sloths for food.

Due to deforestation and hunting, harpy eagles have disappeared from most of Central America's rain forests , where they once ranged. They are designated as "near threatened" by the International Union for Conservation of Nature (IUCN) and considered "critically endangered" in Belize.

"Biologically, the presence of the harpy pair and chick signifies an intact ecosystem that extends to the highest predator," said Jamie Rotenberg, an assistant professor of environmental studies at the University of North Carolina Wilmington, who is studying the birds with Belizean researchers.

The active harpy nest is thought to be the first ever discovered in the tiny Central American country. It's unclear how or why the birds managed to nest in the area, but Rotenberg said the active nesting site is a sign that the Bladen Nature Reserve is functioning to keep wildlife safe from human interference.