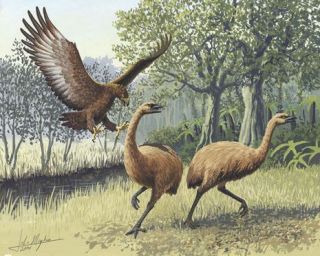 In a blink of geologic time an eagle the weight of a squirrel evolved into a giant predator that fed on animals twice as big as humans. It grew so large it approached the physical limits of flight, a new study suggests.

Before man arrived in New Zealand 700 years ago the land was dominated by birds. With no land mammals, the more than 250 avian species created an isolated and unique ecology.

Amidst this remote laboratory the Haast's eagle was 40 percent larger than today's record holder, the Harpy eagle, and topped the local food chain. The eagle fed largely on the moa, an extinct flightless bird somewhat like an ostrich. Bones from moa as large as 440 pounds (200 kilograms) bear the marks of the Haast's talons.

The eagle held its victim by its pelvis and killed it with a strike to the throat or head, researchers say.

In the new study, scientists examined DNA from 2,000-year-old fossilized bones of a Haast's eagle and compared it to older specimens that at first glance seem utterly unrelated.

The Haast's ancestors, it turns out, where the little eagle and the booted eagle. They were only about 2.2 pounds (1 kilogram) when they crossed the waters from Australia to New Zealand. Within about a million years the predators evolved to as much as 33 pounds (15 kilograms) with a wing span of almost 10 feet (3 meters).

For comparison, larger bald eagles today are close to 14 pounds (6.4 kilograms) and have a wing span around 6 feet (1.8 meters).

"We estimate that their common ancestor lived less than a million years ago. It means an eagle arrived in New Zealand and increased in weight by 10-15 times over this period," Michael Bunce of McMaster University in Canada said Monday. "Such rapid size change is unprecedented in terrestrial vertebrates."

The results are detailed in the January issue of the journal Public Library of Science Biology.

Richard N. Holdaway, an extinction biologist and another member of the research team, explained that when the first ancestor of the Haast's eagle arrived in New Zealand there was no competition for big meals like the moa. The larger the eagle the more offspring it could support because food was abundant if you were big enough to kill it. This became an avenue for survival that the once-small eagle employed to become sizeable quickly.

"With the largest individuals that could kill the largest prey being most successful at producing young, which themselves would be large birds by inheritance from their parents, the change in size within the species was probably rapid in geological time," Holdaway told LiveScience.

The eagles grew so large in fact that they butted up against the limits of how much weight a bird can carry into the air.

"There is a body mass above which normal flapping flight becomes physically impossible," said Holdaway, "Various studies have suggested that that occurs at a body mass of about 15 kilograms," which is the estimated weight of the Haast's eagle.

The giant predator, which was the subject of cave paintings and mythological tales from New Zealand's first inhabitants, the Maori, went extinct soon after the arrival of man, as did a number of other species on the islands.

"New Zealand suffered a major extinction event over the past 2,000 years and about 40 percent of the birds breeding here before human contact are now extinct," Holdaway said.

Why this happened is a question that continues to perplex Holdaway.

"The Haast's Eagle lived in a world that is now gone and it is very much a challenge to put together as much of the structure and process of that lost community, and to see how and why it unraveled so rapidly when people reached New Zealand," Holdaway said. "That has deep lessons for us today with much of the natural world under threat from human activities."