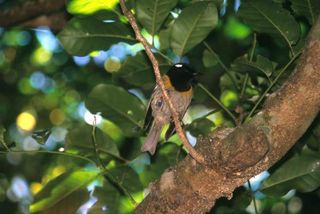 A male stitchbird (or hihi) on Tiritiri Matangi Island. This important pollinator vanished off the North Island with the arrival of mammalian predators 140 years ago, but persists on nearby islands. Where stitchbirds and bellbirds survive, the pollination mutualism still works well.
(Image: © Dave Kelly, University of Canterbury)

As bird species are plucked from an ecosystem thanks to the actions of humans, so too may be the plants that relied on them, according to a study of New Zealand habitats that warns of the cascading consequences of biodiversity loss.

Reflecting a trend seen around the world, New Zealand has lost nearly half of its land birds largely over the last 150 years, with many more species struggling to hang on. But the birds aren't the only group suffering.

Without the key ecological services that birds provide, including pollination and seed dispersal, some of the island country's plant communities on are "sputtering" right along with the birds, noted Dave Kelly, a biologist at the University of Canterbury, in Christchurch, New Zealand, who conducted the new study, which is detailed in the Feb. 4 issue of the journal Science.

In the study, Kelly and his colleagues investigated one such case of a plant being impacted by bird declines, a native flowering shrub called the Rhabdothamnus solandri.

Only three birds have proven useful in pollinating the plant bellbirds, tui and stitchbirds. And the plant's pickiness now presents a problem: Humans have pushed out two of the bird species from the mainland, leaving the shrub's population to shrink without the bird's help.

Yet less than 12 miles (20 kilometers) away from the mainland, the researchers had windows into prehuman conditions: undisturbed islands where both the shrub and its favorite birds continue to flourish.

Based on years spent analyzing and comparing the spread of seeds and pollination on the neighboring islands and the main island, Kelly and his colleagues estimate that seed production by the shrub on mainland New Zealand has dropped by 84 percent ssince humans introduced mammalian predators in the mid-1800s.

Without adequate pollination, "fewer seeds are being made every year. So, as plants die out over time, there are fewer and fewer replacements," Kelly said.

"These particular native birds need to be around or this plant is in trouble," he added. "Even if we know pollination is failing, we can't just run around with paintbrushes pollinating them ourselves."

The researchers tested out several other potential pollinators, including honeybees and some exotic birds, but weren't able to find any species suitable for the specialized job.

Because the decline of a long-lived plant species such as the R. solandri takes place very slowly, similar biodiversity breakdowns could be unreported around the world, suggest the researchers.

"We should be conserving birds not just for their own sake as they are attractive animals but also to keep the whole ecosystem running," Kelly said, adding that early action is much cheaper and more effective than waiting until a species has been reduced to a small area and lost much of its genetic diversity.

One conservation strategy that is growing in popularity throughout New Zealand is the creation of sanctuaries that house species in fenced-off preserves that do not have invasive predators .

Much like the neighboring, undisturbed islands, these sanctuaries "allow visitors to actually see the ecosystem the birds and plants and everything functioning the way it used to," Kelly said.