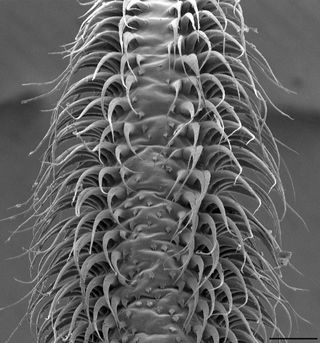 A scanning electron micrograph of the tip of a nectar-feeding bat tongue. Glossophaga soricina uses these hairlike erectile appendages to mop up nectar.
(Image: © Cally Harper)

Bats use erectile tissue to drink. But don't worry — the tissue is on their tongues.

Nectar-eating bats lap up the sweet liquid by engorging their tongues with blood, which, in turn, makes hairlike projections on the tongue stand at attention, new research finds. Together, the erect hairs, called papillae, act like a mop that grabs more liquid than a smooth surface could alone.

Video of the process shows that as the bat reaches out to grab the nectar, its tongue turns bright red as blood automatically rushes in. The discovery is more than simply weird animal trivia, though; researchers think the tongues could be good models for developing kinder, gentler surgical tools. [See Video of the Amazing Erect Bat Tongues]

"These bat tongues are very flexible, and they're soft," said study researcher Cally Harper, a doctoral student at Brown University. "They could be really useful [inspiration] in bending around the curves of blood vessels and intestines, but also, they may minimize damage to some of those soft tissue structures."

Scientists have long known that nectar-feeding bats have hairy-looking tongues, as do hummingbirds and other species that rely on flowers for food. These hair projections are called papillae, which are specialized versions of the bumps that dot the tongues of humans and other mammals. Many human papillae host taste buds, but the hairlike papillae on bats show no signs of sensory tissues. (Bats’ taste buds are further back on their tongues.)

"I thought, 'Oh, that's really interesting that there are these enlarged blood vessels and these really specialized papillae,'" Harper said. "There's the possibility that maybe blood flow was used to move these papillae during feeding."

Dissections of bat tongues revealed that there were sinuses, or spaces, along the sides of the tongues that extended into the papillae, suggesting blood flowed through the millimeter-long hairs. Harper and her colleagues just had to find out whether the papillae moved during feeding.

To do so, they set up high-speed video cameras around feeding stations and let the nectar-eating bat Glossophaga soricina have at the sweet spots. Nectar-feeding bats have keen spatial memory and return to the same spots to feed again and again, Harper said.

At 500 frames per second, the videos showed that as the bats extended their tongues, at first, the papillae were flat against the tongue surface. But then, as the tongue hit its maximum elongation, the hairs became erect. Color video revealed that this change in position occurred as the tongue tip flushed bright red.

"The hairs separate from each other, and that creates a little space between each of the rows of hairs on the tongue," Harper said. "Each one of those spaces becomes filled with nectar."

The process is automatic, and likely driven by muscular tension in the tongue, Harper said. She and her colleagues report their findings today (May 6) in the journal Proceedings of the National Academy of Sciences. Mammalian penile erections also use blood to create stiffness, with arteries dilating to fill the penis with blood as contracting muscles prevent that blood from draining back to the body.