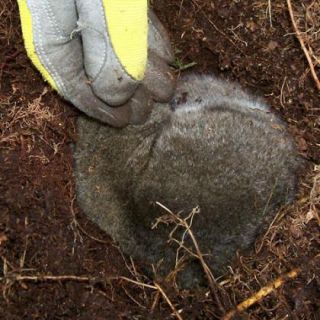 This furball is actually an eastern dwarf lemur hibernating in its underground burrow in Madagascar.
(Image: © Duke University)

The western fat-tailed dwarf lemur was the only primate thought to be a hibernator. Now scientists have discovered that two other lemurs in Madagascar can put their lives on pause, too, by entering seven-month snoozefests.

"To the casual observer, it looks for all the world as if the animals are dead," researcher Anne Yoder, director of the Duke Lemur Center, said of the two species, Crossley's dwarf lemur and Sibree's dwarf lemur. "Their bodies are cold, they are utterly still and they take a breath only once every several minutes or so."

Yoder and colleagues captured several of the lemurs and outfitted them with temperature-sensitive radio collars before they were released. The team found that the lemurs take different sleep strategies depending on which part of Madagascar they live. The ones on the eastern side of the island bury themselves in the soft rainforest floor, maintaining cozy temperatures throughout their hibernation period. Meanwhile, western dwarf lemurs hide out in drafty tree holes, where their body temperature fluctuates with the chancing temperature of the outside air, the scientists found.

The researchers suspect these clawless lemurs might make do with trees because they simply can't bury themselves safely in western Madagascar's hard and dry soils; if they had access to a soft rainforest floor, they might instead burrow into the ground when it comes time to hibernate.

Scientists still aren't sure what triggers hibernation in these lemurs. The burrowing behavior is especially weird to see in a tropical forest; most mammals that spend their winters curled up underground live in the arctic or temperate areas, where winters are frigid and forbidding.

But winters in the eastern forests of Madagascar present their own energetic challenges for lemurs. Maintaining a stable body temperature (which is key to survival) is tough to do amid the drastic winter temperature changes in the region, the scientists note. And high-quality fruits, a crucial part of dwarf lemur diets, are scarce during this time.

Beyond finding surprising similarities with other mammals that spend their winters snoozing, it's exciting to think about lemur hibernation since the animals are closely related to humans. Studying how the lemurs' pause button works may help scientists investigate the possibility of inducing human hibernation (think "2001: A Space Odyssey").

The research was detailed May 2 in the journal Scientific Reports.