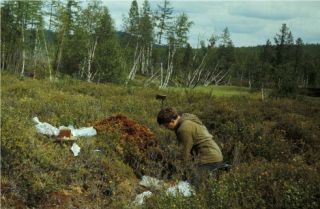 This image shows researcher Andrei E. Zlobin during a 1988 expedition to the site of the Tunguska impact. Here, he is digging into peat-bog layers to look for evidence of the explosion. In a nearby river, Zlobin found three rocks that could be meteorites from the blast.
(Image: © arXiv:1304.8070, Zlobin )

In June 1908, a mysterious blast occurred above the remote Russian forests of Tunguska, Siberia, with 1,000 times more power than the Hiroshima bomb, flattening trees over an area roughly the size of Tokyo.

The most widely accepted theory is that a huge asteroid or comet (not a UFO or chunk of antimatter) exploded as it entered Earth's atmosphere. But with just one death, few witnesses, and no fragments nor any impact craters to study, scientists have been left to puzzle over what exactly caused the so-called Tunguska event.

Now one Russian researcher claims to have found the first meteorites possibly left by the Tunguska impact. [Fallen Stars: A Gallery of Famous Meteorites]

Andrei E. Zlobin, of the Russian Academy of Sciences' Vernadsky State Geological Museum, says he collected more than 100 stones that looked like potential meteorites from the bottom of the Khushmo River's shoal during an expedition to the site of the Tunguska impact in 1988.

Zlobin revisited this collection in 2008 and singled out three particularly interesting rocks, nicknaming them "dental crown," "whale" and "boat" because of their features. The biggest one, "whale," weighs a mere 0.02 pounds (10.4 grams) and measures just over an inch diagonally (29 millimeters).

Zlobin says the stones have telltale signs of melting and what appear to be regmaglypts, shallow surface indentations that are sometimes created when a space rock makes a fiery entry into Earth's atmosphere.

According to Zlobin's calculations, the Tunguska explosion would not have generated enough heat on the ground to melt rocks already on Earth; he believes these fragments were cooked inside the Tunguska fireball high above the planet.

The research was detailed Monday (April 29) on the website arXiv.org, a preprint server for physics papers. As the Physics arXiv Blog points out, the findings still need to be confirmed through a chemical analysis and a rigorous, internationally collaborative investigation. There are also some unanswered questions remaining about why Zlobin waited to publish his work.

"It's not hard to imagine that the political changes that engulfed the Soviet Union in the year after his expedition may have played a role in this, but it still requires some explaining," the May 2 blog post reads.

If confirmed as meteorites, the rocks could help scientists finally picture the object behind the historic Tunguska explosion. Zlobin already has a hunch it was comet with a density similar to that of Halley's Comet. He writes that his three rocks could have been ripped from the stony bodies packed inside an icy comet as it tore through Earth's atmosphere, exposed to extreme heat stresses.

Meteorites are space rocks that survive the plunge to Earth. They are typically categorized as iron meteorites (ones composed of about 90 percent iron) or stony meteorites (ones made up of oxygen, iron, silicon, magnesium and other elements).