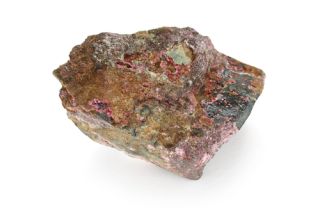 Beautiful blue cobalt is a transition metal, perched in the midst of the Periodic Table. Long used in impure form as a pigment, this element now appears in magnets, high-tech turbines and even in cancer treatments.

In pure form, cobalt is silvery-blue and brittle. It is similar to iron and nickel, according to the Environmental Protection Agency, and — like iron — can be made magnetic. As a result, some high-powered magnets are made from alloys of cobalt and aluminum or nickel, according to the Royal Society of Chemistry. A manmade isotope, Cobalt-60, is commonly used in cancer treatments; the gamma radiation released by this radioactive isotope can target tumors, according to the American Brain Tumor Association, particularly brain tumors that need precision treatment.

According to the Jefferson National Linear Accelerator Laboratory, the properties of cobalt are:

Cobalt salts were used to decorate ancient Chinese pottery with brilliant blue designs. Other ancient civilizations discovered the artistic potential of cobalt without knowing what metal they were using. One 2014 study found cobalt blue glass beads in a Danish grave 3,400 years old. The same glass is found in ancient Egyptian tombs, including King Tutankhamen's, the researchers reported. The discovery hints at trade connections linking the two far-flung locations.

Ancient origins aside, cobalt itself was not discovered until the 1730s — and even then, it was years before the scientific community agreed that this new metal existed. Until the 1700s, the pigments made from cobalt were called smalt or safflor, and were thought to be made of bismuth, copper, iron and arsenic. Then, Swedish scientist George Brandt pulled an unknown metal out of some ore from the Riddarhyttan mines of Sweden. (It pays to have connections: Brandt's family owned these mines.)

Brandt described the metal and its properties, including its magnetism, and even described what happens when cobalt is dissolved in ammonia. (It turns red, "like cherry juice," according to a 1967 profile of Brandt in the journal Transactions of the Kansas Academy of Science.) The discovery was controversial, according to the Brandt profile, and even in 1760, Brandt was still defending the find in a talk at the Academy of Science. Fellow Swedish scientist Torbern Bergman would eventually conduct further study to confirm Brandt's findings in 1780, according to a 2011 article in Nature Chemistry.

The only stable isotope of cobalt is Co-59. But radioactive cobalt can occur naturally, too. In August 2014, a team of astrophysicists reported the discovery of cobalt-56 in supernova SN2014J, an exploding star 11 million light-years from Earth. The supernova emitted about 60 percent of the sun's mass in cobalt-56, the researchers reported in the journal Nature. The isotope has a half-life of 77 days and gradually decays into iron-56.

Though still used in pigments, cobalt plays a variety of roles in modern technology. In September 2014, researchers in Denmark reported that they'd created a crystalline material that can draw oxygen from air, store it, and then release it as needed. Just 2.6 gallons (10 liters) of the material can suck all the air from a room, the researchers said. Just as iron is an essential ingredient in hemoglobin, the blood protein that snags oxygen from the lungs, cobalt is a key portion of this new material.

If oxygen-slurping cobalt weren't odd enough, a group of American researchers are working to integrate the metal into the food-safety process. Today, foods are tested for dangerous bacteria with a labor-intensive process that involves taking a sample, isolating and culturing any bacteria and waiting for them to grow. During this time, the batch of food being tested has to sit on the shelf — a particularly big problem for fresh fruits and vegetables.

Now, Sam Nugen, a food scientist at the University of Massachusetts, Amherst, hopes to come up with a better solution. Nugen and his team have developed a way to attach cobalt-iron nanoparticles to bacteriophages, or viruses that infect bacteria.

The phages lock on to specific bacteria, such as E. coli. Next, researchers use a magnet to attract the cobalt-iron nanoparticles, essentially yanking the phages (and their bacteria loads) out of the food sample. (This process would be done only on small samples of any given food, and the phages and nanoparticles would not be introduced into the food supply.)

"By using cobalt, which has different magnetic properties than the iron oxide, we're able to make a much stronger magnet," Nugen said. The phages and bacteria "can be pulled out in seconds."

This process is easily visible in a YouTube video posted by Nugen that shows the difference between traditional nanoparticles and cobalt-iron nanoparticles.

Ultimately, Nugen said, the idea is to engineer the phages to help detect, as well as isolate, dangerous bacteria. Phages infect bacteria by injecting them with their own genetic material, turning the bacterial cell into a factory for more phages. Researchers could arrange for the phages to force the bacteria to express certain genes or proteins that food scientists could then detect.

In June 2014, Nugen and his team received a grant totaling nearly half a million dollars from the U.S. Department of Agriculture to perfect the technique. They're now working to optimize the separation.

"For us, this all relates to nanotechnology, and what we can do most efficiently because of the small size we have," Nugen said. "The cobalt lets us go smaller while still being able to pull the particles out fast."

Read the entries on cobalt from these scientific organizations: