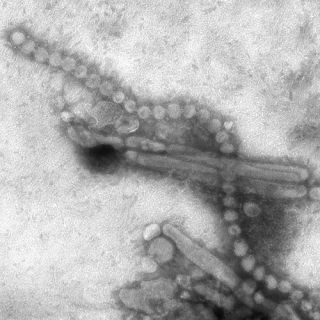 Influenza A H7N9 as viewed through an electron microscope. Both filaments and spheres are observed in this photo.
(Image: © CDC)

Let's start with three new developments reported on earlier this week by Jason Koebler, U.S. News & World Report's science and technology correspondent:  the first reported case of the new bird flu strain outside China; the fact that any potential vaccine tests in animals (not humans) may be up to six weeks out; and, more ominously, that Chinese officials suspect that there may be cases of human to human transmission in the 100-plus reported cases (which include 22 deaths). [Bird-Flu Update: Possible Cases of Human-to-Human Transmission Investigated]

"The situation remains complex and difficult and evolving. When we look at influenza viruses, this is an unusually dangerous virus for humans," Keiji Fukuda, the World Health Organization's assistant director-general for health security, said Wednesday at a briefing.

Chinese officials —and public health officials around the world —had hoped that this potentially virulent and deadly bird flu strain (H7N9) could be contained inside China and that it would not progress or mutate to the point where humans could transmit the strain to other humans. But, of the patients analyzed so far, half appear to have had no contact whatsoever with poultry.

Now, with the first reported case outside China appearing in Taiwan this week — a 53-year-old male, Taiwanese citizen who worked in the Jiangsu Province in China, developed symptoms three days after returning to Taiwan, according to Taiwan's Central Epidemic Command Center —and the fact that Chinese officials are publicly saying that at least some of the existing cases may have involved human-to-human transmission, this new bird flu strain could spread —and fast. [New Bird Flu Virus: 6 Things You Should Know]

None of this is good.

Right now, 18 percent of the cases in China have ended in deaths. While this is still less deadly than the previous avian flu outbreak in China six years ago —the H5N1 bird flu virus eventually killed more than 300 people after spreading from China to other countries in 2006 —the death rate for this new Chinese bird flu epidemic is more than triple the mortality rate of tuberculosis in China today.

Despite widespread fears among public health officials that the earlier bird flu strain years ago might become a human-to-human pandemic, that didn't occur. Nearly all reported cases of the earlier bird flu strain, while deadly, seemed to jump from poultry to humans who were handling them or in contact with them. For this reason, despite dozens of outbreaks, it was easier to contain the spread.

But, if this new bird flu strain does, in fact, become capable of human-to-human transmission, and it takes awhile for a suitable vaccine to be developed, then international public health officials are going to start sweating. And the public, rightly so, will be worried.

One flu-virology expert, John Oxford from Queen Mary University, told Reuters this week that the emergence of this completely new strain of bird flu infections in humans was "very, very unsettling." This new strain is, in fact, a mixture of three different types of bird flu variants and "seems to have been quietly spreading in chickens without anyone knowing about it," he said.

Public health officials, in general, have been worried about bird flu viruses for years. Research several years ago showed that the virus could be transmitted from an expectant mother to a fetus, and that the virus isn't just contained in the lungs —it can also migrate throughout the body. This new strain is likely to have similar capabilities. [New Rules on Mutant Bird Flu Research Stir Debate]

What's more, it could re-ignite fears about the possibility of deadly global pandemics. A decade ago, several well-known virologists and public-health experts warned in published papers that the world was at risk for pandemics that could kill tens of millions of people, or even more, without adequate infectious disease monitoring and medical research. The 2006 Chinese bird flu outbreak came on the heels of those global pandemic warnings.

The good news is that China is more transparent about disease epidemics now than it was a decade ago, and that the number of reported cases with the new bird-flu strain has not jumped dramatically, so far. And China learned a lot about how to limit the spread of bird flu after the last outbreaks, simply by closing down poultry markets that appear to be likely starting points.

But the fact that the new H7N9 strain has now moved outside China —and that Chinese officials are taking a close look at human-to-human transmission possibilities —should send up more than a few red flags. Just because the previous bird flu outbreak in China didn't spread quickly and prove as deadly as some had feared does not mean that this new outbreak will follow a similar course.

If the suspicions of human-to-human transmission potential is confirmed, that alone makes the threat of a pandemic (as opposed to a series of local outbreaks that can be contained with efforts to close down poultry markets or the sale of infected birds) more likely. Chinese media have said in recent days that officials believe some of the cases to be likely human-to-human transmissions. WHO officials have said that this new strain transmits to humans more easily than the previous strain.

In the case of a pandemic, a vaccine would need to be developed and distributed quickly.  A California company (Inovio) is in the early stage of developing a potential vaccine, with plans to get access to the virus in a highly protected lab environment for its initial tests. In a worst-case scenario, a vaccine could skip animal tests and be administered to humans.

Let's hope it doesn't come to that —and that public health officials are paying attention.

This article first appeared as It's Time To Worry About the New Chinese Bird Flu in the column At the Edge by Jeff Nesbit on U.S. News & World Report. The views expressed are those of the author and do not necessarily reflect the views of the publisher.