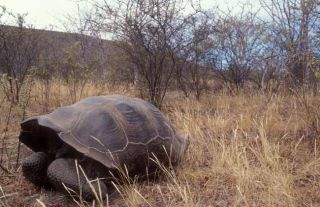 Tortoise from Volcano Wolf on the island of Isabela in the Galapagos.
(Image: © Claudio Ciofi)

An extinct giant tortoise could make a comeback now that living turtles in the Galapagos Islands have been confirmed as hybrid descendents.

Researchers had previously scratched their heads over the group of mixed-ancestry tortoises living on the island of Isabela in the Galapagos. But the connection to the extinct species only clicked after they compared the genetic makeup of living tortoises with DNA taken from museum specimens of the giant tortoise that once lived on the island of Floreana.

"The [living tortoise] samples were collected in 1994, but we had no idea what was in there because we didn't have Floreana data," said Gisella Caccone, an evolutionary biologist at Yale University in New Haven, Conn. "OK, now we have genotypes for 15 to 25 animals from the museums, so we did the analysis and boom!"

Whaling ships and buccaneers that sailed the Galapagos waters in the 18th and 19th centuries used tortoises to replenish food supplies, harvesting more than 250,000, according to logbooks. Other tortoises ended up slaughtered so that their fat could be burned in oil lamps.

However, the same humans unwittingly helped ensure that the Floreana tortoise lived on as hybrids. Ships heading out to the rich whaling grounds often dropped off their tortoise loads on the harsh volcanic island of Isabela, in the Galapagos. The Floreana tortoises lived there and interbred with other giant tortoises to produce the hybrids that baffled researchers years later.

Caccone said that the "alien" group of tortoises could allow researchers to resurrect the extinct Floreana tortoise by selective breeding, if enough hybrid tortoises still live on Isabela.

"We have the possibility, a remote one, to do some assisted breeding like a 'Lazarus' or 'Phoenix' project," Caccone told LiveScience.

For that, the researchers need more money and a better idea of how many giant tortoises live on Isabela. Caccone plans to head back to the island and survey her shelled subjects in December.

The current study is detailed in the Sept. 23 issue of the journal Proceedings of the National Academy of Sciences.