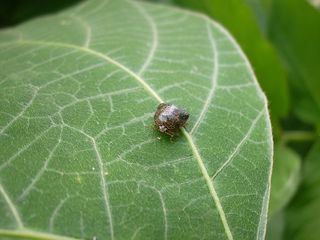 Pesky vines of kudzu native to Asia have crept throughout the southeastern United States in recent decades, and now a stinkbug that feeds on the plant is making an American invasion, too. Worse, new research shows that the kudzu bugs' taste for soybeans threatens crops outside of the South.

Kudzu (Pueraria montana) was first introduced to the United States as an ornamental plant in the 19th century and later promoted to farmers in the Southeast as a means of controlling soil erosion. But now the plant is considered a problematic invasive species and a pest, as it coils over trees and shrubs, often sealing their death by blocking out sunlight.

Kudzu bugs (Megacopta cribraria), meanwhile, which are also native to Asia, were only detected for the first time in the United States in Georgia in 2009. Because of their diet and life cycle, the pungent-smelling insects were thought to be largely limited to areas where they could find the invading vine, their favorite meal.

Based on observations in the wild, researchers believed the eggs of kudzu bugs that hatched during the spring were part of a first generation, "Generation A," which would eat only kudzu during their immature phase before graduating to soybeans during adulthood. It was thought that their offspring, "Generation B," posed a greater threat, as they hatched during the summer and could eat soybean crops throughout their lifetime. [Invasive Species: The Peskiest Alien Mammals]

But in a greenhouse laboratory, researchers at North Carolina State University found that baby Generation A kudzu bugs did not have a restricted kudzu diet. These immature insects were able to live off soybeans alone, and they reached maturity and reproduced, the researchers said. And the bugs didn't thrive on just any legume; greenhouse experiments using snap beans instead of soybeans failed to produce the same results.

"Researchers began seeing some of this behavior in the wild in 2012, and, while those data aren't quite ready for publication, our lab work and the field observations indicate that kudzu bugs are potentially capable of spreading into any part of the United States where soybeans are grown. And soybeans are grown almost everywhere," study researcher Dominic Reisig, an assistant professor of entomology at NC State, said in a statement.

"It also means that both annual generations of kudzu bugs could attack soybean crops in areas where the bug is already established, which would double the impact on farmers," Reisig added.

The findings were detailed in an article in the April issue of the Journal of Economic Entomology.