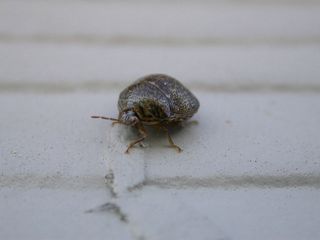 Kudzu bugs, which feed on the infamous vine, showed up in Georgia in 2009.
(Image: © D. Suiter, Univ. Georgia)

As if kudzu, the invasive "vine that ate the South," weren't trouble enough, one of its little friends from Asia has joined it in the United States.

The kudzu bug, known formally as Megacopta cribraria, is a type of stinkbug that feeds the kudzu vine in its native Asia. While the invading vine is its favorite meal, the bug also attacks soybeans, and as it spreads from Georgia to neighboring states, there are fears it will broaden its palate and target other legume crops, including peanuts.

Kudzu was brought to the East Coast more than a century ago to control erosion. Its quick growth wreaked havoc on the ecosystem: It smothers and strangles other plants, uproots trees and breaks branches with its weight. The bug appears to have hitched a ride by accident much more recently. Just how remains a mystery. [Image Gallery: Invasive Species]

Daniel Suiter, an associate professor of entomology at the University of Georgia who received initial reports of the bug in the U.S., struggles to describe its odor. It is "not an awful smell, more of a bittersweet, pungent, unpleasant odor," he said.

Scientists first learned of the tiny kudzu bug invasion on Halloween weekend in 2009, in northeast Georgia, he recounted. As temperatures cooled, the sinkbugs looking for places to spend the winter swarmed to houses.

Now that the bug is here, the spread of the fast-growing kudzu vines may decrease, but probably not signficantly, Suiter said.

"It is not like kudzu is going away, but it puts another stress on the plant, because of the number [of bugs] that get on a plant," he said. The additional stress may slow and reduce kudzu's growth, he said.

Searching for an enemy

The bug's arrival has more-worrisome implications for agriculture, however. A small soybean seedling can have 40 bugs feeding on it, according to Wayne Gardner, a professor of entomology at the University of Georgia who is looking for ways to control the new arrival's population.

In addition to soybeans, the bug has been found on green beans and wisteria, and Gardner is concerned its tastes will broaden. The key to the bug's broad palate is a bacterium living in its guts. Known as an endosymbiont, it helps them digest their meals.

"Will the endosymbiotic bacterium adjust to other plants we have in southeast Georgia? I would be willing to bet it probably can or will evolve, so I am concerned about other legumes, one of those being peanuts," Gardner said.

As the bugs have spread into some surrounding states and have been found as high off the ground as the 30th floor of an apartment building, Gardner is investigating natural ways to control their population.

He has focused on fungi, including one called Beauveria Bassiana that is common to the soil in Georgia. It attacks insects by germinating through their cuticles or outer coverings.

From an entomologist's perspective, the bug's arrival brought an opportunity, Gardner said.

"This is an exotic insect that has not occurred anywhere in this continent and all of a sudden it is right here," he said. "It has been a challenge, but it has been one of those career-rewarding challenges."