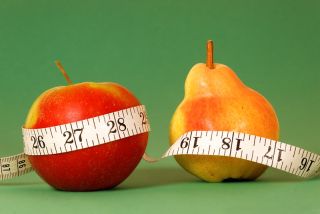 Body shape is important for more than clothing style. Researchers have found exess belly fat — as seen in the apple-shaped body, as opposed to the pear-shaped body where the fat is lower down on the hips and butt — can increase risk of kidney disease.
(Image: © hatanga | Shutterstock)

Are apples bad for the kidneys? The answer is yes, if you're talking about an apple-shaped body in which fat is concentrated in the abdominal area.

Researchers in the Netherlands have found that excess abdominal or belly fat — as seen in the so-called apple-shaped body, as opposed to the pear-shaped body where the fat is lower down on the hips and buttocks — can significantly raise the risk of kidney disease even among people with a modest-size belly and who are generally not overweight.

While the connection between obesity and kidney disease has long been established, this latest study is the first to show how just a small increase in abdominal fat begins to strain the kidneys, reducing the blood flow to these organs and raising the local blood pressure within them. [8 Reasons Our Waistlines Are Expanding]

The study appears today (April 11) in the Journal of the American Society of Nephrology.

The kidneys are two bean-shaped organs, just below the rib cage, that remove waste from the blood stream and send it out of the body as urine. People can function well with just one kidney. Nevertheless, chronic kidney disease is on the rise. More than 10 percent of American adults now have some form of kidney disease, according to the Centers for Disease Control and Prevention (CDC). Among diabetics, 35 percent have kidney disease.

Most forms of kidney disease have no cure, except through a kidney transplant from a healthy donor. Kidney disease is the eighth leading cause of death in the United States, according to the CDC, and approximately 90,000 Americans are waiting for a transplant.

To further investigate the known connection between obesity and kidney disease, researchers led by Arjan Kwakernaak, a medical doctor and a Ph.D. candidate at the University Medical Center Groningen in the Netherlands, analyzed kidney profiles and waist-to-hip ratios in 315 healthy individuals with an average body mass index (BMI) of about 25 kg/m2. The waist-to-hip ratio is a measure of central body fat distribution; and a BMI of 25 is considered the upper border or normal weight.

"We found that apple-shaped persons — even if totally healthy and with a normal blood pressure — have an elevated blood pressure in their kidneys," Kwakernaak said. "When they are also overweight or obese, this is even worse."

An apple-shaped body was associated with a twofold-increased risk of high renal blood pressure, seen in both men and women, Kwakernaak said.

The researchers don't know why this is happening. The reason is not because fat is weighing down on kidneys, crushing them, Kwakernaak said. The researchers speculate that the cause might be from the fat triggering inflammation or insulin resistance, which can impede blood flow, or fat creating free radicals, which can damage the kidneys at a cellular level.

As for anyone with a pear-shaped body, you're not off the hook. Researchers at University of California Davis found that gluteal adipose tissue — that is, that fat around the backside, thought to be harmless, if not useful for sitting for long periods — secretes proteins associated with inflammation and insulin resistance, the latter being a precursor to diabetes. Their study was published last month in the Journal of Clinical Endocrinology and Metabolism.

No word yet, though, from researchers on the healthfulness of a starfruit-shaped body.