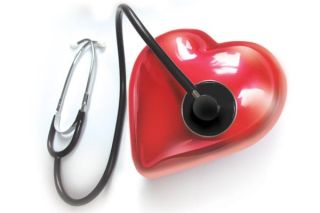 People who are normal weight but carry extra fat around their belly have a higher risk of dying from heart disease than obese people, a new study suggests.

The findings add to a growing body of research that so-called visceral fat, or fat around the organs of the abdomen, is particularly bad for health.

“Our research shows that if a person has a normal BMI, this by itself should not reassure them that their risk for heart disease is low. Where their fat is distributed on their body can mean a lot," said study researcher Dr. Francisco Lopez-Jimenez, a cardiologist at the Mayo Clinic in Rochester, Minn.

The study involved 12,785 U.S. adults who participated in a national survey and were followed for an average of 14 years. During that time, 2,562 participants died, including 1,138 from heart disease.

Participants were divided into six groups based on which of the three BMI groups they fell into, and whether they had a normal or high waist-to-hip ratio. Men whose waist measurement was 90 percent or more of their hip measurement were considered to have a high hip-to-waist ratio. The same was true of women; those with waists that were 85 percent of their hip size were classified as having a high hip-to-waist ratio.

Participants with normal BMI but a high waist-to-hip ratio had the risk of dying of cardiovascular disease, and the highest risk of dying from any causes among the six groups.

"The high risk of death may be related to a higher visceral fat accumulation in this group, which is associated with insulin resistance and other risk factors," said study researcher Dr. Karine Sahakyan, also of Mayo Clinic.

The study was presented today (Aug. 27) at the European Society of Cardiology meeting in Munich.

Pass it on: People who are normal weight, but carry weight around their belly may be at particular risk for death from heart disease.